Pius Hadzide Is A Threat To Press Freedom; Sack Him ― Group To Akufo-Addo 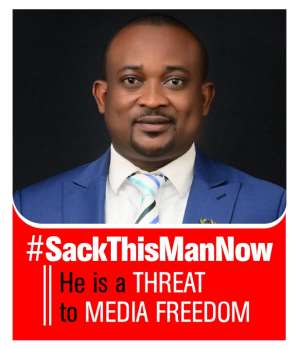 CEGA has observed with great worry a development if not unchecked will further dent the image of the government so far as press freedom in the country is concerned.

During the normal discussions on TV3 this morning 11th May 2020 hosted by one Mr Johnny Hughes, the Deputy Minister for Information Pius Enyonam Hadzideh was on that programme with Hon. Kwame Governs Agbodza the MP for Adaklu Constituency in the Volta region.

The Hon. Deputy Minister made claims to the effect that the government had made substantial investments into bringing up more Covid-19 Testing Centers in Ghana, and thereby making it possible for Ghana to undertake massive testing of suspected Covid-19 infected people.

On his part, the host of the program asked the Deputy Minister to give further and better particulars of the nature of the investment the government had specifically made in the sector.

Not only did the Deputy Minister get infuriated about Host's line of question but he went on to accuse the Host of being biased and unprofessional.

The CEGA wishes to place on record that, this is unbecoming of a Deputy Minister for Information in Ghana.

As a Deputy Minister, Hon. Pius Hadzide must understand that he is expected to serve the people of this country and he must do so with utmost patience, humility and candour.

He must understand that he communicates on behalf of the government and that the state pays him to give accurate and unbiased information.

Furthermore, the CEGA has noted with apprehension that this Deputy Minister appears on television and radio programmes almost unprepared and not very much on top of issues.

He mostly engages in unbridled and unmitigated politicization of all issues.

We wish to register our utmost disgust about the conduct of the Deputy Minister's unwarranted attack on the Host of TV3 this morning.

As the Deputy Minister of Information, he is supposed to protect journalist instead of attacking such professionals who are genuinely doing their job.

In view of this, the CEGA calls on the President to immediately call Hon. Pius Hadzide to order and request him to apologise to Johnny Hughes and the viewers of the Morning Show hosted by him.

In the midst of this pandemic, what Ghanaians need most among others are;

3. Cool heads and reasonableness to prevail during discussions

4. Avoidance of obsession to political polarization, cacophony and nuisance especially from persons paid by the taxpayer.