Nigeria police in talks with kidnappers 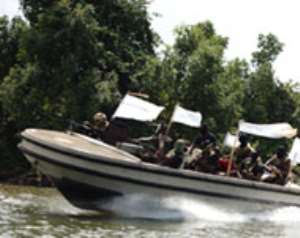 Police officials have said they are negotiating with the kidnappers for the release of eight foreign oil workers, but have not said who was responsible for the Friday hostage-taking.

"We are talking with them, we hope to make some breakthrough soon," police spokesman Haz Iwendi said by telephone from the capital, Abuja, on Saturday. He said the kidnappers were from the surrounding community, but did not provide further details.

A major militant group in Nigeria's oil-rich southern delta said it was not responsible for the kidnapping.

"We were not [involved]," the Movement for the Emancipation for the Niger Delta, or Mend, said in an e-mail.

The group - which has kidnapped oil workers in the past as part of a campaign ostensibly for a better distribution of Nigeria's oil wealth - said it believed the most recent kidnapping was purely a money-making scheme, but did not explain where this information came from.

Six Britons, one American and a Canadian were kidnapped on Friday off a rig that was drilling off Nigeria's southern coast. The rig is operated by Aberdeen, Scotland-based Dolphin Drilling Ltd for the Nigerian oil company Peak Petroleum.

Dolphin spokeswoman Sheena Wallace said she did not have the names of the missing crewmen, information about demands or what group was behind the kidnapping. Local representatives of the company could not be reached for comment.

In recent months, oil-region militants have blown up oil pipelines and kidnapped other foreign workers. Mend has claimed responsibility for two kidnappings and blown up oil installations.

The group's actions have cut oil production in the country and helped drive prices higher on international markets.

Presidential spokeswoman Remi Oyo called the abduction "a misunderstanding between (local) communities and the oil company involved", without elaborating. Oyo said Olusegun Obasanjo, the president, is working for the peaceful release of the hostages.

Militants such as Mend have justified other such kidnappings as part of their campaign for local control of oil revenues by inhabitants of the country's south, who feel cheated out of the region's oil revenue.

Other groups have kidnapped oil workers as bargaining chips to prod companies to increase jobs or improve benefits. The kidnappings usually end peacefully.

Norway's Fred. Olsen Energy ASA, Dolphin Drilling's parent company, said in a statement that Nigerian and other authorities were working to resolve the situation.

Dolphin's Wallace said the kidnappers struck the platform, which had 84 people on board, about 5am on Friday. The rig was about 65km off the Nigerian coast.

She said drilling had temporarily been suspended and that the families of the kidnap victims, as well as other crew members, had been contacted.

Nigeria, which normally pumps 2.5 million barrels of crude a day, is the fifth-largest source of oil imports to the US.

Oil prices jumped by almost $2 a barrel on Friday after reports of the kidnappings. Light sweet crude for July delivery rose $1.99 to settle at $72.33 a barrel on the New York Mercantile Exchange. In London, Brent crude traded on the ICE Futures exchange gained $1.64 to settle at $71.03 per barrel.