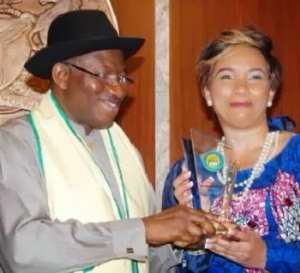 …Still Regrets Accident Experience
In life, everyone has his own past, and when he or she is given an opportunity to turn back the hands of the clock, the person would not hesitate to do things better.

Some years ago, the President of Actors Guild of Nigeria (AGN), Ibinabo Fiberesima was involved in an accident in Lagos, which claimed the life of a medical doctor. The matter was dragged to court and the former beauty queen was convicted for manslaughter.

Recently, the pretty actress and philanthropist led an 80-man delegation of Nollywood practitioners to President Goodluck Jonathan, where the number one citizen was decorated as the Grand Patron of AGN.

Ibinabo used the occasion to make some requests from the President on what the movie industry in Nigeria wants from the government, which includes the passage of a bill to strengthen Nollywood.

Osaremen Ehi James spoke with this recently appointed board member of the National Council for Arts and Culture (NCAC) in an interview, which later turned out to be very emotional. Enjoy.

I am convinced that the President wants a change in the industry and that he has Nigerians in his heart. From what I observed about the President, he feels the pains of every Nigerian and I think Nigerians should support him.

What would Nollywood gain from your appointment into the NCAC

You see, the National Council for Arts and Culture (NCAC) is like an advisory body. An actor is appointed as a member of the board for the first time since 1999. For me, there is a light at the end of the tunnel because we would be represented properly. We sell the arts and culture of Nigeria to the outside world. So, like I always say, I can't do it alone. We would all have to work together to make a change in the industry. I know the President, from the bottom of his heart, truly wants to transform Nigeria. He wants us to be the best.

There are insinuations that your visit is politically motivated, especially as it is coming a year before the next general elections, what's your reaction to that

I became the President of Actors Guild of Nigeria (AGN) in 2012, and I have been writing letters to him. I am sure others wrote letters too. But, I thank God that the President responded to my own. If you read my speech, you will understand why I went there. I am trying to restructure AGN. I get accolades from people, but the success is not for me alone, it is for all of us. The person coming after me might not have the same vision with me because we lack continuity culture in this country. We don't have sustainable development culture.

But the President wooed the people through entertainers in 2010

(cuts in) I don't listen to what people say, they will always have something to say, but my aim is getting Nollywood to where it should be. That's my priority.

Your appointment came shortly after the visit…

Yes, because of my speech. You should read my speech and understand it. I didn't think this would come to me, I thought it would be for somebody else. Even those I went with said my delivery was outstanding. Because of the kind of person I am; I am down-to-earth and blunt, a lot of people are praising God for it. My phone kept ringing and I had over 4,000 messages on my phone.

Do you feel pressurized to perform

No, because I perform well in any given position. I like to impact on people's lives and so for me, this is a bigger challenge in a bigger platform to show that we can do it.

What is your message to your people

Let us work as a team, individuality cannot make Nollywood, we must work collectively.

What have you learnt in life so far

Do you think your past has really helped your present

If there is something you want to reverse in life, what would that be

That the car accident never happened.

Do you still feel sorry about the incident

I will forever be sorry about it; it is not something I like to talk about. It is not easy; sometimes you sit down and think about the incident.

What did you learn from that experience

Like I said, I like to appreciate people. You think you know people until something happen to you. I realized that all you have is God. Human beings have a way of doing what they have to do. Even if they don't mean it, it just happens. But with your God, your darling, nothing goes wrong.

TWO POPULAR ACTRESSES DENY FIGHTING EACH OTHER IN PUBLIC

My husband complains too much

Annie and 2face's Love Story: How They Met at age 15, first words, how they both suffered and their big wedding!!!

Latest Photo Reports
Catch up with all the political quotes from our politicians.
Advertise here
More Interviews
ModernGhana Links
I believe in women and our stories - Lydia Forson on why she plays strong women on screen
Peter Okoye: Raging, Raging Mr P
Naa Ashorkor - I’d like to see more films that speak to mental health challenges in young people
“Ghana Jollof is a gift at the most difficult time of my life” – Diji Aderogba
I’m a good cook - James Gardiner
Ghana Jollof is my first romantic role - Funnybone
I Have A Very Funny Side -Joselyn Dumas
Interview: What AfroZons Dubai Soundoff is - Sheila Okonji-Ashinze
I like the different versions of me that people have in their minds - Toke Makinwa
TOP STORIES