Live From The Woods: Double Gamer – The Craze For Multiple Sexual Partners In Ghana 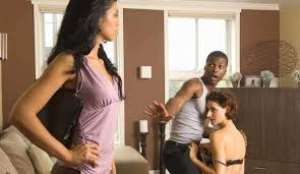 “If you have a husband forget it. I don’t want double game,” said a man in his 4X4 car parked close to the Mamprobi Post Office. I took some few steps, wanting to eavesdrop on the conversation, shoved my phone to my ear and faked a call. I listened and volunteered occasional quarrel with my partner on the line to give it some credibility. He repeatedly banged his hand on the wheel. “You know I love you?” he asked seductively.

I didn’t hear what the lady said, but I reckoned it was infuriating enough to move the older man to press the car horn in reaction. It was frightening. My heart leaped into my mouth. “What is it? What is it?” inquired a lady startled by the car horn. She was just an inch away from the big gutter by the Post Office. “Sorry madam”, the man pleaded. I watched as the lady chuckled and whisked her slim silhouette away from sight. I never saw her again. Or perhaps she entered the house near the gutter.

“You said you didn’t have a husband so how come?” he continued. “We have done many things together only to hear that you have a husband”, he delivered as though sad. He chuckled and dropped the line. I concentrated to take some few more steps not to raise alarm. The man revved his car, monitored his side mirror and drove past me while still on the phone. I heard him mouthed something, but I couldn’t figure what he said. He’s disappointed in his partner. Or perhaps, he’s rather disappointed in himself. What I read from the way he drove past me is that, he’s an unhappy man.

This sharply brings to mind a conversation I had with a colleague who read his undergraduate program in a journalism school in Ghana. He confessed of having slept with almost all the ladies in his undergraduate class. He said the ladies were always ready to be asked out. The least whisper one makes, he gets to attract more than one lady for his ‘consumption’. And it isn’t as though they are in for big money. Little. Their needs are small, but that demands great sacrifice from them. He said some of these girls have boyfriends with plans to tie the knot in the future. So what is wrong?

What is the craze in town for? Is it sex? Or money? Or adventure? Or experience? Or a unique combination of all? Many sacrifices have been made in the name of sex. And many persons have committed suicide because they could not contain the infidel lifestyles of their partners.

The craze in town is for a lady or a gentleman to have more than one partner for several reasons. When this happens, sex becomes accessory. A lady friend confessed to having more than one partner. And she said, “Brako-Powers I have more than one guy, but there’s one of them I love so much to the point of death.” This begged asking: If you’re ready to die for this one guy why not give your all to him? The conventional answer would be that: my partner is not trustworthy. Or that my partner could not administer to my needs.

Or better do not put all your eggs in one basket. Or someone would say at least this is better than having gay and lesbians in town. This has nothing to do with which is the lesser evil. It has so much to do with our morality which is in tatters. We are throwing our morality to the gutters.

If trust is the issue, let’s build it with whoever we are with. If the moral codes of our society are falling apart, then we need to fix them. At least we cannot create an infidel society for the future generation. I know there are irresponsible men and women out there, however, I also know there are genuine and responsible men and women out there. Remember: change is infectious; it has no formula; no color, but when it happens you see its manifestation.

Resolve to be the change...Spark it, and lead with love.

Set aside the purported rejection of 2022 budget - Majority ...
50 minutes ago

Xavier Sosu fights back, files for stay of execution against...
50 minutes ago