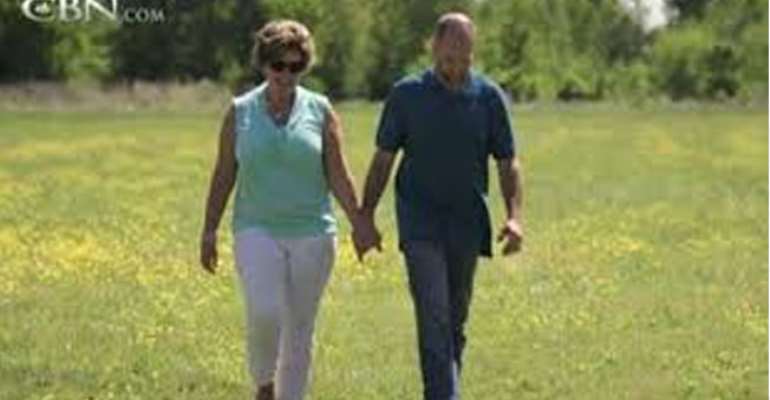 David Patrick loves making unique guitars. Every new creation reminds him of how God changed him into a new man.

“I took something old and made it new. That’s what He does with us. He took me as a mess and put me right back together.”

David grew up believing in Jesus, and considered himself a Christian. But even into adulthood, he never felt he needed God’s help. So when he and his wife Shannon couldn’t conceive, they decided to fix it themselves.

“We had to take out a second mortgage on our home to have to pay for in-vitro fertilizations,” David says.

Shannon was on treatments for years without success. As the debt, stress, and frustration continued to mount, Shannon blamed herself.

Shannon remembers, “When all your friends around are getting pregnant and, you know, you feel like you can’t provide your husband with a child, a pregnancy, I just felt that something was wrong with me.”

David became angry with God.
“I would pray and say, you know ‘God, why can’t You give me just one child? I’m not asking for much. Why can’t You just make it happen? You’re God; You can speak it into being. You can snap Your finger and You can say that it will happen,'” says David.

The Patricks gave up on the treatments in 2002 and decided to adopt. That same year, David was in an ATV accident. He walked away with internal bruising and doctors prescribed Percocet for the pain. David discovered it had other benefits.

He kept taking the meds long after the pain subsided. When the prescription ran out, a friend gave him Oxycontin, a stronger more addictive painkiller.

David recalls, “It was a complete different feeling I’d never experienced before—too good to describe. But it was a feeling that I knew I wanted to feel again.”

Now addicted, David started taking money from his dad’s auto repair shop, the place he’d been working since he was a teen. His dad, David Sr., noticed a difference in his behavior.

At home, David’s behavior was erratic and he and Shannon’s relationship became more strained. Then she found his stash.

Shannon told him to leave. A week later, David checked into a drug detox and rehab facility. That night in his room he turned his heart to God.

David says, “I said ‘Lord, if You will take me, save me, save me from myself, save me from my sin. But Lord, be the Lord of my life. Lord, change me. I am Yours.’ After I cried out to God, I literally fell into a deep sleep. I remember waking up the next morning and pretty much almost all of the withdrawal symptoms were gone.”

David was discharged into his dad’s care. A month later he returned home on the promise he would attend Narcotics Anonymous. The next thing he had to do was tell his dad about his addiction, and the thousands of dollars he stole from the business.

David Sr., says, “All that was forgiven. It was a love that I needed to do ’cause he is my son but it was the only way for him to start anew.”

David and Shannon started building their relationship again with each other and God. Then after 11 years of trying, Shannon gave birth to a baby girl.

Shannon remembers, “When she was born I was just overwhelmed with joy and thanking God that I was able to experience a pregnancy.”

David says, “And I just started praising the Lord. Just thanking God, thank you Lord. And just tears going down my face.”

David has been drug free since 2006. During this time, he and Shannon added to their family with two adopted daughters. Now when David plays his guitar he has a captive audience.

“When God changes you, you’re changed. When you have an encounter with the Lord our God, it will change you. It will deliver you,” says David.