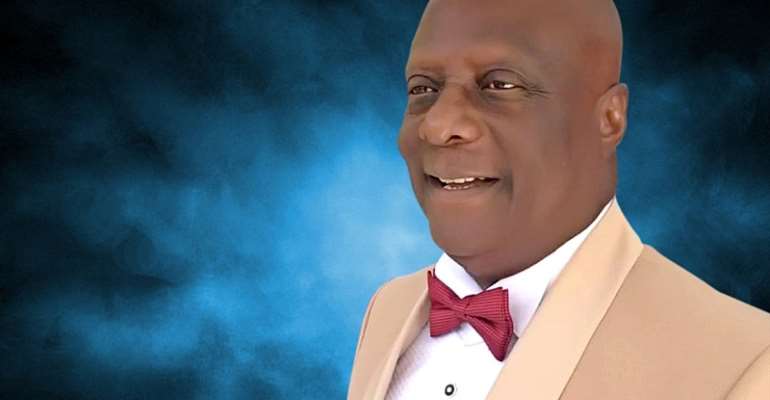 The Chief Executive Officer (CEO) of the Holy Trinity Medical Centre and the Holy Trinity Spa and Health Farm, Dr. Felix Kwaku Anyah on Saturday bagged two awards at this year’s 2019 edition of the Ghana Business Quality And Pride Awards.

Perhaps his leadership virtues manifested more as Acting CEO of Korle-Bu Teaching Hospital during his term of administration.

The Awards ceremony was held at the Movenpick Ambassador Hotel in Accra Saturday 9th November, 2019.

This is the latest phenomenal achievement among several other prestigious awards won by Dr. Felix Anyah from his values of truth, integrity, transparency, sacrifice, charities for the needy and humility with boldness, innovation, passion, commitment, confidence, stoicism.

Dr. Anyah established the Holy Trinity Medical Center in 1988 and has grown to be an outstanding health sector with 42 Doctors and over 300 auxiliary staff.

The Holy Trinity SPA—the integrative health wing—is the first of its kind in the whole of Africa—after 14 years.

An efficient HEALTHCARE MANAGER, he won the EXCELLENCE IN PRIVATE SECTOR HEALTHCARE AWARD for the Private Sector Healthcare by the Chartered Institute of Marketing Ghana in 1999.

In 2017, he was adjudged the overall BEST CEO in GHANA and BEST CEO Healthcare (Both Public and Private 2017.

Dr. Anyah Pioneering Role in WELLNESS in West Africa has been rewarded with the SPECIAL AWARD for PROMOTION OF HEALTHY SOCIETY by the society of Private Medical and Dental Practitioners.

Dr. Felix Anyah was born on 29 November 1950 into a poor family of Christian faith healers who do not use orthodox medicine when sick. He was given the name Gamesu, meaning the one who ends worries and brings comfort.

His surname was derived from the characteristics of a tree called ‘Ayatsi’ in Ewe and represents – Truth, Boldness, Unbreakable and strength in Christ.

As ‘Gamesu’ Dr. Anyah is committed to end the suffering of the poor or disadvantaged. Among his numerous kind and charitable social activities include:

• Adoption of the Kaneshie cripples home in 1989 for free medical care for the past 30 years.

• Establishment of the ‘HELP THE EPILEPTIC’ charity for free drugs to epileptics nationwide who cannot afford their drugs since 1995 to date.

• In 2012, he built an ultramodern welding shop for an alcoholic he had rehabilitated in Sogakofe and this was commissioned by the then Deputy Minister of Health.

• Many motocyclists in Sogakofe protect themselves with free donation of 300 Helmets from Dr. Anyah’s benevolence.

• Several Fishermen have had their livelihood improved with fully motorized canoes for deep fishing on the Volta River.

• Dr. Anyah retrained an ex-convict, provided him a furnished accommodation and sponsored him to be a Plumber in Sogakofe.

• Under the Department of Social Welfare in the South Tongu District. Dr. Anyah provided a seed capital of 1,000 Ghana Cedis to epileptics and wheel chairs and 3-wheeled motorized vehicles to cripples— all numbering over 100.

As an acting CEO AT THE Korle-Bu Teaching Hospital Dr. Anyah donated:

• Motorcycles to the Security Department

• Mattresses to the Polyclinic

• Stocks of anaesthetic drugs for emergency surgeries to improve the welfare of patients and functioning of the hospital.

As any ANYAH, Dr. Anyah with entrepreneurial and biblical boldness albeit fraught with peril, sought the court judgment on his new integrative medical Department which was misconstrued to be a hotel – and won at the High Court.

He grew up in Christian faith, passion for helping solve people’s problems, humble yet inwardly bold. He imbibed the following healthy lifestyle from the culture of the faith healers church; regular walkercises, healthy eating, adequate sleep, positive attitudes and passion for complementary and alternative medicine including prayer, meditation, steam bath with herbs.

His aim to become a lawyer was changed to a medical doctor when he escaped death with severe pneumonia and was abducted from parents by grandaunt, who had him recover with orthodox medicine.

He grew up with excellent human relations, entrepreneurial spirit, philanthropy, marketing, writing and counseling skills and with boldness to use the legal system to advance his career.

In 2003, as a member of the Ghana Medical & Dental Council – a statutory body for the regulation of medical practice in Ghana, he researched, published and advocated professionally ethical advertising for medical practitioners.

This has positively changed the early very conservative position of the Council against professional advertising by doctors in Ghana. In 2007, Dr. Anyah won a landmark case in medical jurisprudence in court against the Government of Ghana (Value Added Tax), on the payment of VAT by his novel Health SPA by using the WHO definition of Health – “a state physical, mental, emotional, social and spiritual wellbeing and not only absence of disease” –

This judgment has widened the view of ill-health by practitioners, policy makers and parliament who earlier emphasized physical diseases. Dr. Anyah has been a role model and counsellor for young doctors on ETHICS, BUSINESS and SUCCESS in Medical Practice – shaped by his several awards of excellence in BUSINESS;

Leader in the Private Medical Sector Award in Ghana, 2003 and

Leader of the Health Sector Award, 2009

Dr. Anyah’s belief in faith-healing and other alternative and complementary medicine together with his success as an orthodox medical practitioner influenced his leadership role in INTEGRATIVE HEALTHCARE and has made him the “Father” of Integrative Medicine in Ghana.

The SPA is a major Health/Medical Tourism destination in West Africa, with several awards including:

The pioneering role by Dr. Anyah in WELLNESS in Ghana has been rewarded with the;

Dr. Anyah was appointed Chairman of the Health Facilities Regulatory Agency – a rare privilege and honour for a private medical practitioner to be appointed by the government to head a new Statutory Public Agency for REGULATION AND LICENSING of all health facilities in Ghana (2015 -2016).

These national appointments flow in part, from several recognitions of excellence including:

Excellent Service for Security, Peace, and Safety in Africa and for an incisive – Security Watch (Nigeria) (2009) 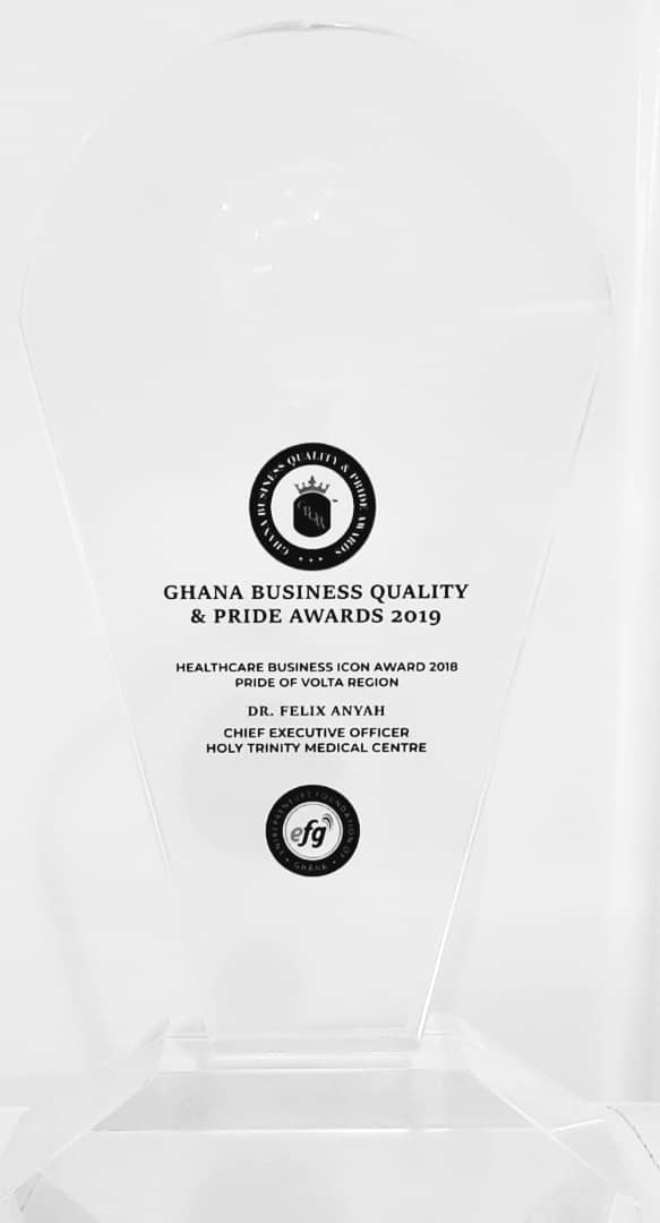 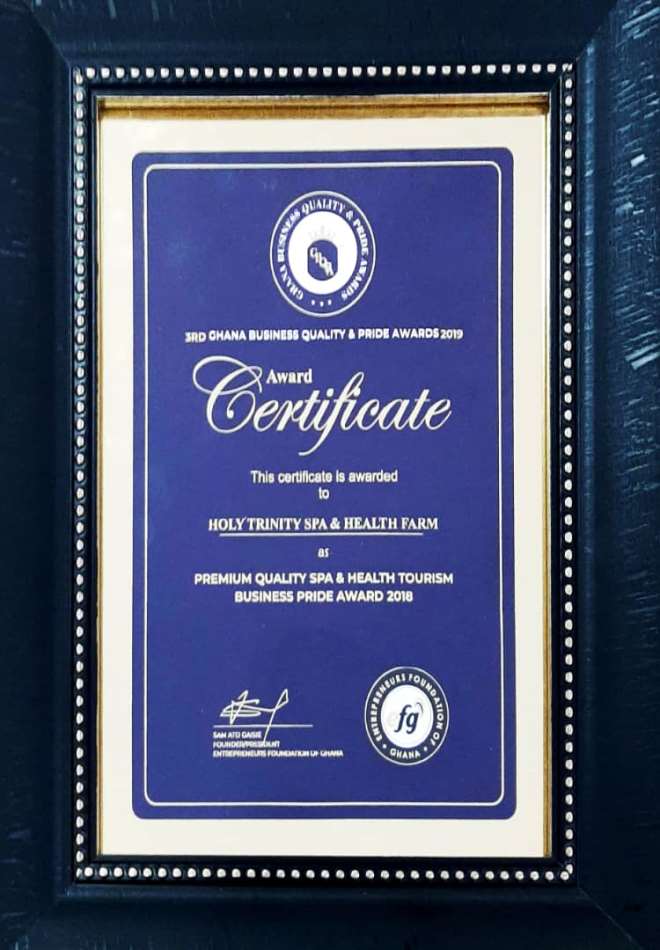 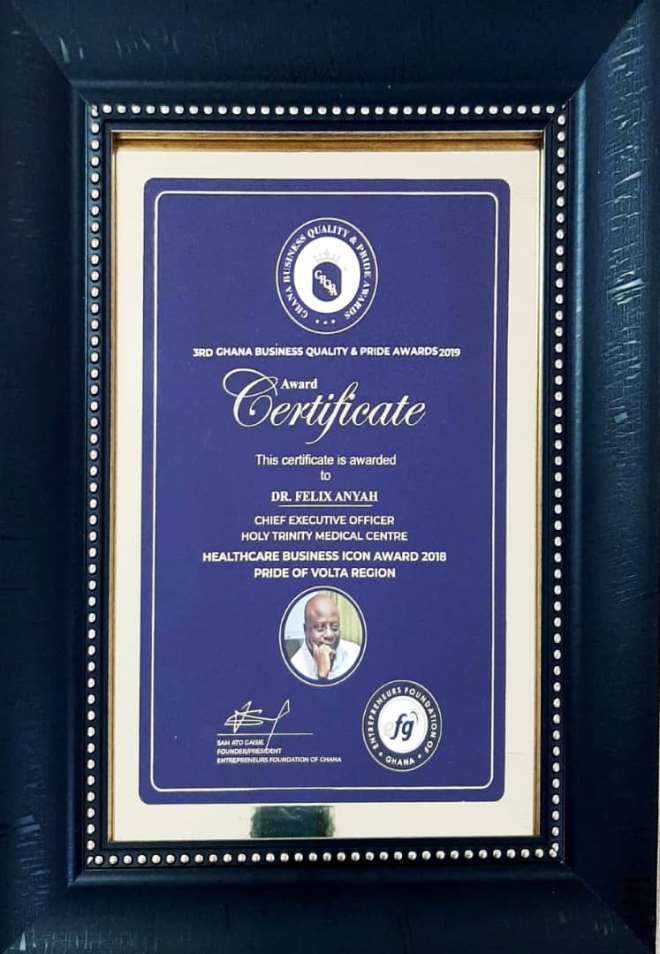