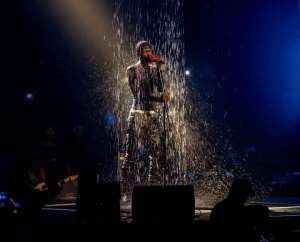 Last week, I said on 'Ay3 Hu' social talk show hosted by Nana Ampofo on Accra-based Hot 93.9FM that fast-rising Hiplife/ Hip Hop artiste Black Sherif who is also known as Blacko is the 'Artiste Of The Year.'

As usual, a panelist on the show disputed my candid opinion but it manifested on Saturday after the "Second Sermon" crooner put up unarguably the best performance at this year's 3Music Awards which was held at the Accra International Conference Centre(AICC).

The pinnacle of Blacko's world-class performance was when 'rain' fell on him while on stage. Patrons, fans and other showbiz enthusiasts who caught a glimpse of the show are asking why the event organizers allowed the 'rain' to fall on him while using a microphone for fear of being electrocuted.

But unambiguously, what most showbiz enthusiasts must learn is that: in Showbiz, you have to be creative , innovative and crazy. Blacko, punctiliously delineated all the three elements of showbiz on the night.

In consummating the craziest aspect of showbiz on the night, he took a risk. If he had died , he would've still died a hero. Now it has paid a dividend. Thanks to his management team !!

This is what I did for the late Hiplife/Dancehall artiste Terry Bonchaka as his then manager. Taking risks was our hallmark. All the shows that won the legendary late 'Puulele' crooner innumerable bays emanated from odious risks we clasped.

Irrespective of the vulgar word in his "Kweku Frimpong"(Second Sermon) leviathan hit song; seriously, the song still remains the song of the year.

The lyrics, vocal ability, instrumentation, adroitness - everything, on point. Fortunately, Blacko has been nominated in the 23 VGMA 'Artiste of the Year Category alongside: 'King Promise, Kidi, Kuami Eugene, Joe Mettle and Sarkodie.

Bluffly , though Lynx entertainment signee, Kidi has done tremendously well in the year under review and likely to pull a surprise - nothing should deprecate Blacko's chances of annexing the crown.

Yes, have you forgotten Grammy award-winner Burna Boy featured on his 'Second Sermon' remix and keeps performing with the song on every stage he mounts?

Blacko is the new King of Ghana Music!! Big Ups to his management team again!

Watch excerpts of his 3music Awards performance below.