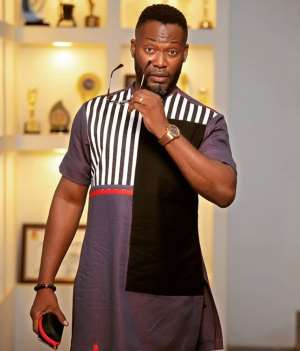 "One challenge I constantly deal with is the attention I get from the opposite sex. It never gets to a point where I can say I'm done with that. It's a daily battle. The ladies are bold, they come at me. But the Bible even tells us to flee from such temptations" he stated while speaking about some challenges he faces in his career.

Discussing the topic "Waiting On God". Adjetey Anang said "If you're waiting on something, there must be a sense of belief that you would get what you're waiting for. You wait in anticipation. Just like David who was anointed to be King at 16, he waited till he was 30 before becoming a King".

He described his own predicament waiting on God for a child after several years of marriage. "It was really hard waiting for 7 years to have a child after marriage. In hindsight, I can put it in perspective and encourage others. The wait was worth it because it increased my faith."

He stressed it was difficult sometimes with the glimmer of hope when they're expecting and all of a sudden a miscarriage happens. "People also made it difficult by always suggesting solutions and offering unnecessary sympathy. Even though it came from a place of concern, it only made things worse for my wife and I" he said.

Speaking about his career, the multiple award-winning actor recalled that he started off being concerned with showcasing his talents and following his passion. The fame came along unexpectedly and he learnt how to adapt and make a living out of it.

"One of the things I did to stay relevant to this point is adding value to what I do. Talent is good but it's not enough. And so immediately I realized that education became something I couldn't negotiate on. I think that's one of the things that really made me accessible to all walks of life and the business aspect as well" he added.

Asked about how he combines being an astute Christian with working in such an industry, he responded "When Jesus commanded his disciples to go into the world and make disciples of all nations, he didn't specify and I believe He wanted us to go into places that are usually alluded to as sinful and use our influence to impact those industries. So I chose acting because I found fulfilment there and saw it as an opportunity for ministration as well. Where there is darkness, you shine your light".

However, he insisted that he doesn't go to work with a judgemental or condemnation spirit but rather to negotiate and showcase his values to others. "I live by example and not by speech. That has helped me to sustain this quest to make a difference in the industry."

He also encouraged young upcoming actors to tread cautiously and endeavour to leave a legacy rather than focus on fame and money.

"If you're a Christian, there are certain qualities you can't part away with and prayer is important in keeping a good character. The bad company would produce bad character so you have to sift who your friends are and who you hang out with on a daily basis because before you know it you're speaking their language. You have to be careful that the quality of friendship you keep is not impacting on you negatively."