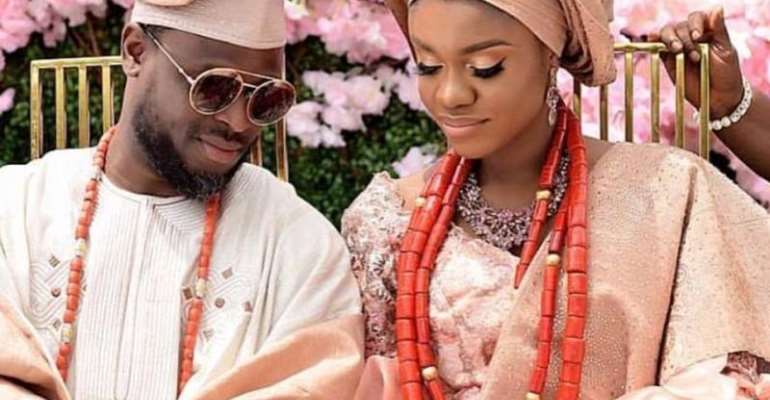 Mr Isaac Kwaku Acheampong, who is the father of Ghanaian singer, Becca, has finally spoken about the ongoing brouhaha the singer, her husband and mother, have been caught in

Becca’s mother, Miss Juliana Oti Yiadom, in a recent interview has reacted to reports that the singer's ’husband, Tobi Daniel, has tagged her as a witch, therefore, cutting her off from Becca.

During the explosive interview, Miss Juliana disclosed that her daughter hasn’t spoken to her for about a year now, stating that it all started from Becca and Tobi’s wedding, where she sidelinedand also disrespected by her son-in-law.

In reaction to the myriads of issues raised by Becca’s mother, the singer’s father has now issued a press statement to counter it all. The letter which was shared by Quophi Akyeame, who is close to Becca’s family, stated that Madam Juliana grossly lied in the interview.

An excerpt of the letter reads: “Everything that was said about our daughter and our inlaw is not the truth.” The Press Statement further issued an apology to the general public as it also condemned Becca’s mother for deciding to go public with the issue.

Read more from the statement below.
2nd July, 2019
THE ACHEAMPONGS
PRESS RELEASE
We the Acheampong family will like to sincerely apologise to all Ghanaians for the unfortunate incident that has occurred with regards to our daughter, Rebecca Acheampong (Becca), our beloved in law Dr. Oluwatobi Sanni Daniel and Madam Juliana Oti.The dent created we believe paints a negative picture about Ghanaians, our culture and traditions.

Our unqualified apology further goes to our in-laws in Nigeria and the world over. We are fully aware of the fact that our actions or inactions are vital in this matter and therefore use this platform to stand strongly to say that NONE of the speculations spewed by madam Juliana Oti against our cherished son in-law Dr. Oluwatobi Sanni Daniel is true and shouldn’t be given any credibility. His conduct as a very responsible young man in this crisis further convinces us that our decision to welcome him as in-law was nothing short of right.

The open internet approach of discussing family issues of Madam Juliana Oti is not a reflection of the character of our family and by extension that of our country and its beautiful culture and traditions. This family is a respectable and loving one that welcomes people with open arms. We therefore state again that everything that was said about our daughter and our in law IS NOT THE TRUTH.

Rebecca Acheampong (Becca) is a respectful girl, raised with strict Christian morals and values and will not do any of what she is being accused of.

Our beloved in law on the other hand is a respectful and humble young man who has added growth to our daughter’s life. Tobi is not a thief. He has never called his mother in law a witch. He loves and respects his mother in law and has even contributed immensely to the growth of her family in this short period of marriage.

It is sad that the name of our family and that of our in laws have been dragged into this otherwise unnecessary matter. It is very unfortunate how a family issue has become a public issue. We apologise sincerely and ask the public to respect the family’s privacy as we work on our internal issues as custom demands.