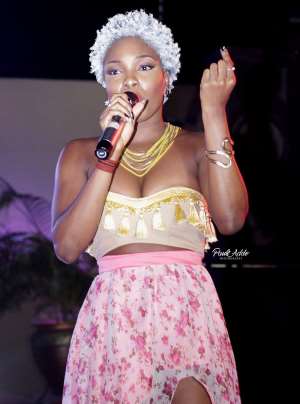 One of Ghana’s hottest female singers, Feli Nuna faced the most traumatic experience in her music career when she was attacked with sachet water at the Ebony Memorial Concert on March 29.

The artiste who walked off the stage abruptly ending her performance, is now regretting her actions.

Speaking on the Cosmopolitan Mix, Monday, Feli Nuna said, even though she was upset and felt disrespected, she could have addressed the issue at the spot. I wish I stayed on stage to speak to them. Let them know that it is one industry, we as artistes are here to entertain. So, they should make an effort to support, regardless of their affiliation to other artistes,” she said.

The ‘Love Me Now’ singer explained rivalries between artistes are good but fans must not take it to the extreme with hate and anger.

She stated, an artiste should not suffer an attack because of another as a result of such rivalries.

Feli Nuna added one reason for her regrets, is she did not factor in the feelings of her fans present at the event.

“My fans, even though, were angry and also disappointed I walked away, they were expecting more. Someone sent me a message that she cried when the water hit me but enjoyed my performance. It made me feel bad,” she stated.

The artiste told Sammy Forson, host of the show, that she has not gone on stage to perform since the incident occurred.

The event organisers apologised to Feli Nuna and made efforts to fish out the perpetrator but were unsuccessful.

Feli Nuna called on Ruff Town Records to beef up their security the next time they have the event.

“If they are also going to put out a statement, it should be towards condemning what happened,” she added.

Feli Nuna said she would not let the fear get to her and miss the Ebony Memorial Concert in 2020 if there is going to be one.

The late dancehall singer, Ebony was Feli Nuna’s friend and the latter has pledged to always support anything that has to do with the late singer.