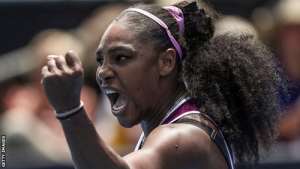 Williams, whose last singles title came at the Australian Open in 2017, will play either Amanda Anisimova or Eugenie Bouchard in the last four.

Caroline Wozniacki reached the semi-finals with a 6-1 6-4 victory over the 2019 champion, German fourth seed Julia Gorges.

The Dane, who will retire after the Australian Open in Melbourne, will next play unseeded American Jessica Pegula.

Wozniacki and Williams will play their doubles semi-final against Belgian pair Kirsten Flipkens and Alison van Uytvanck later on Friday.

Petra Kvitova, who lost to Osaka in the Melbourne final last year, also reached the last four in Brisbane.