GHPL: Why Maxwell Konadu Is Under Pressure To Win The Title 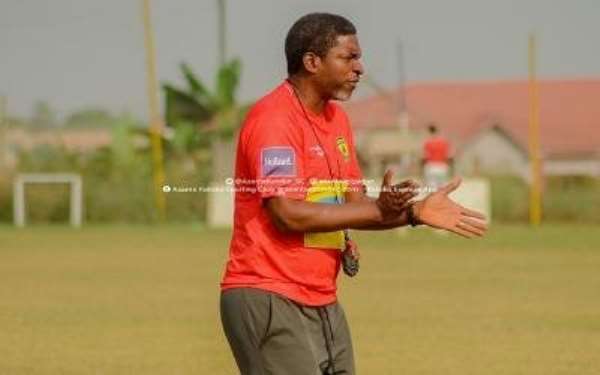 The Ashanti Kingdom has been blessed with natural resources such as gold, cocoa and kola nuts.

As a result, the culture of Asantes have become synonymous to success.

The hunt for trophies and domination in football has moved from hope and belief to entitlement as fans keep demanding for more success on a regular basis.

Over the years, the expectations from the Kotoko fans and board have been over the roof and rightly so.

In 2010, the International Football Federation of History and Statistics voted Asante Kotoko as Africa’s club of the century.

In the past decade, Asante Kotoko have won three league titles, the most by any side in that period.

With Maxwell Konadu appointed as coach of the Porcupine Warriors, the markers will be drawn out from matchday one and he will be expected to win the league and make a lasting impact on the team.

His first coming
In July 2011, Konadu was appointed as assistant coach of Kotoko, the club where he first gained popularity as a prolific goal scorer.

He was appointed as head coach before the start of the season following the sacking of Serbian coach Bogdan Korak.

The 2011/12 season was a remarkable one for Kotoko and Konadu as they won the league comfortably.

The Porcupine Warriors finished 14 points ahead of neighbours Ashanti Gold to clinch their 22nd league title in their history.

In the 30 matches played, Konadu’s side won 18, drawing nine and losing just three.

Kotoko scored 43 goals and conceded 18 goals with their biggest wins of the season coming against Wassaman (4-1) and Ashgold (3-0).

After the season, Konadu was appointed as the assistant coach of the Ghana national football team by the Ghana Football Association, succeeding James Kwesi Appiah.

During his Konadu’s time away, he amassed national team experience whilst coaching the Ghana u-20 and u-23 teams as well as enjoying two spells as assistant coach of the Black Stars.

His time away from Kotoko was a noteworthy one which saw him fully equip himself to become a better manager.

Konadu being a victim of his own success in his first stint with Kotoko will all but raise the bar high as he will be expected to at least replicate his earlier success.

Stakeholder expectation
The same way pressure is a significant agent when it comes to metamorphism, becoming coach of Asante Kotoko comes with an incredible amount of pressure.

Pressure which bears positivity with the intent of serving as a catalyst for success at the club.

Maxwell Konadu’s contract with Kotoko sees him pocket $5,000 a month, a fee that explains the targets set for the former Ghana u-23 coach by the board.

The Kotoko board expect Konadu’s Kotoko to emerge as champions by the end of the season.

The 45-year-old coach has an uphill task of also helping the Porcupine Warriors qualify for the group stages of the CAF Champions League for the first time in 14 years.

The Kumasi faithful will play their role and attend the various matches especially the ones in Kumasi.

However, history suggests that fans of Asante Kotoko have a low level of tolerance as excellence is an obligation rather than a choice.

At Kotoko, the fans do not just expect three points but also a good team performance.

This was highlighted in Charles Kwablan Akonnor’s reign as a section of the fans showed their dissatisfaction with how the team played despite winning a majority of games in the NC Special Competition.

Kjetil Zachariassen was also put to the sword by the supporters after a string of poor performances in the CAF Champions League qualifiers.

Konadu has started his reign on a positive note winning the President’s Cup against arch-rivals Hearts of Oak, but he will still be under pressure until it leads to a league triumph.

A good foundation
In what has been a dormant year for Ghana football, Asante Kotoko still remained the most active side.

The Kumasi based club started the year with CAF Confederations Cup engagements as they progressed to the group stages.

The Porcupine Warriors continued their adventure into the NC Special Cup, a three-month competition which they won..

Kotoko moved on to play the qualification rounds of both the CAF Champions League and Confederations Cup.

In terms of activity and match fitness, Konadu has the full complement of a squad ready to compete.

Kotoko’s exploits in the year 2019 went beyond just participation.

CK Akonnor led the 24-time Premier League champions to triumph in the NC Special Cup, a novelty league organised by the Normalisation Committee in the absence of the Ghana Premier League.

The Porcupine Warriors qualified as the second-best team in Zone A and as a result, faced Hearts of Oak in the semi-finals.

In terms of personnel, Konadu has at his disposal an experienced Felix Annan, Sogna Yacouba and Emmanuel Gyamfi.

Just as the Ashanti Kingdom were blessed with natural resources such as gold, cocoa and kola nuts, Maxwell Konadu has been blessed with familiarity with the club, a good foundation and key players who are fit.

When the new season kicks off, Konadu will be under immense pressure to win the league, and rightly so.