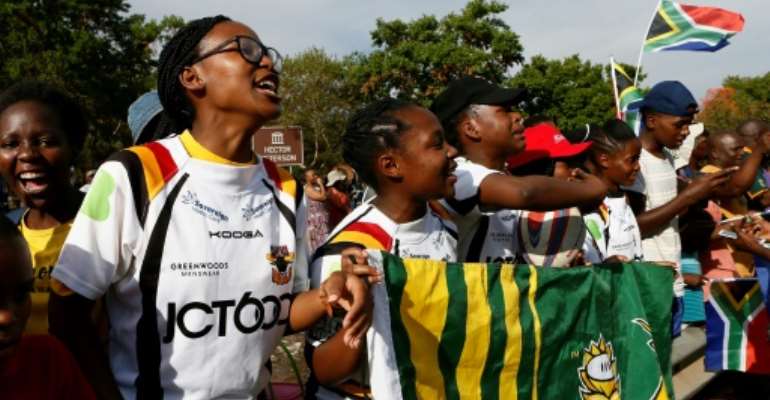 Khanyisile Makumbana knew she couldn't miss the Springboks' victorious parade through Soweto after their Rugby World Cup triumph in Japan.

The 16-year-old plays rugby in the famous black township on the edge of Johannesburg and was overcome with emotion on Thursday as she watched a hugely symbolic trip through a neighbourhood where the rugby team was once reviled.

"Seeing them in the eyes, it brought tears in my eyes," says Makumbana.

The Springboks' 32-12 final victory against England was greeted with joy across South Africa, where rugby was once the preserve of the white minority population.

Not so long ago black people, oppressed by the apartheid system, despised the Springboks, a team which for decades excluded non-whites.

"The rugby team came to symbolise the arrogance of Afrikaner power," says Bongani Dlamini, a retired teacher from Soweto.

"Many Sowetans are proud to wear Springbok shirts today -- 30 years ago anyone foolish enough to wear one would have put their life at risk."

On Thursday a sea of green and gold greeted the country's returning heros as they began their tour of the nation in what would have once been considered enemy territory.

That enmity has slowly changed since the end of apartheid and the election of Nelson Mandela in 1994 as the first black president.

The sight of Mandela wearing a Bok shirt and handing South Africa captain Francois Pienaar the Webb Ellis Trophy after the 1995 World Cup final was iconic and immense in its own way.

But events in Yokohama last week took it to another level as the trophy was handed to Siya Kolisi, the first black player ever to captain South Africa in a test.

This team, forged by Kolisi on the field and coach Rassie Erasmus off it, feels like a team that truly represents the nation, prompting the #StrongerTogether motto and hashtag for the Boks in Japan.

That togetherness was reflected by the presence of some white fans on the streets of Soweto.

Peter Schultz wanted to bring his two children to witness "a new dawning".

"The team is finally representing more the nation. It is a fantastic transition," he said. 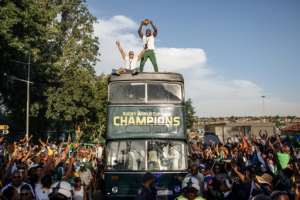 Having Kolisi as captain "shows that rugby is not for whites only," adds Makumbana, who plays at the Soweto Rugby School Academy (SRSA), one of only three rugby acadamies in a township where football is king.

"If your head is into the right mindset, you can win."

SRSA founder Chris Litau says her dreams are realistic, as Kolisi beat the same path on which his 250 -- including 50 girls -- young players are now travelling.

"We had to convince people who said rugby was only for whites," he adds.

Makumbana trains three times a week on dusty ground strewn with shards of glass and plastic bottles, but nonetheless has this year been picked for a prestigious youth tournament in which most participants will be white schools.

Litau did not open his academy, which also offers English, mathematics and physics courses, in order to make money.

"We had to convince people who said rugby was only for whites," he insists.

Tshegofatso Mmapitsa, who also came to celebrate with the Springboks on Thursday, initially had to train in secret, as her family considered rugby to be a violent sport. 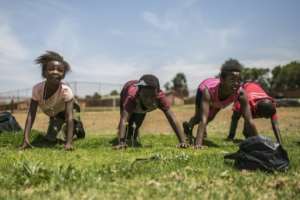 The oval ball has given these young Sowetans the confidence they lacked in a society plagued by violence against women.

"Rugby allows you to kick, to shout, without being arrested," says Makumbana, who was for a long time embarrassed about her masculine gait, but is now a person no one dares to harass.

Keletso Seboko, 18, says that she no longer fears being assaulted while out at night.

"We are not afraid of anything," she says. "Nobody is going to hurt you. You feel powerful. At night you feel you can walk alone."

Daily life, however, remains complicated. Makumbana doesn't have running water at home, while her mother, a cook, cannot afford a bus ticket to see her daughter play.

But dozens of SRSA players continue to pull on patched-up school kits and worn-out street shoes and do battle in oppressive heat.

"My dream," says Litau, "is that one of them wears the Springboks jersey."

16 die in crash at Akim Asafo, others in critical condition
18 minutes ago