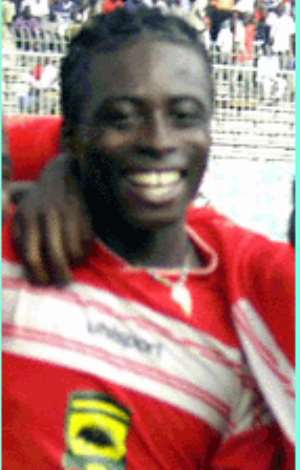 Kumasi Asante Kotoko are not in the least bothered about what appears to be a psychological game being played by Royale Aigle de Dschang as regards tomorrow's CAF Champions League return leg qualifier at the Obuasi Len Clay Stadium.

Though the Camerounians gave notice of their arrival on Thursday, they failed to honour their word and were still not in town as at press time yesterday.

But Kotoko's Head Coach, Emmanuel Kwasi Afranie, says Kotoko are focused on tomorrow's match and can, therefore, not be distracted by any such external influence.

He said he had done the most important thing by pysching up his players for the battle ahead and left the issue of their opponents' arrival to the officials.

Significantly, the players' concentration is on winning the match in order to go for the special winning bonus offer from the club's management.

Coach Afranie allayed the fears of the massive Kotoko faithful in respect of last Wednesday's 2-0 defeat to Ashantigold with the assurance that a different story will be told tomorrow.

According to “Coach hene”, the real deal will unfold tomorrow as Wednesday's match was used to fine-tune the players for the task ahead.

Even though Kotoko enter tomorrow's game with an away goal advantage following the 1-1 first leg result in Douala, the Porcupine Warriors have decided to approach this game as underdogs purposely to avoid complacency.

As for support, the Ghanaian team is expected to have it in full, though they honour this international assignment 'away from home'.

Since Tuesday, Kotoko have been training at Len Clay and are, therefore, expected to get used to the environment to give them the edge over their opponents in this all-important encounter.

Fortunately, Coach Afranie has no injury worries and might feature the same team that impressed in the first leg.

In the absence of Habib Mohammed, Mohammed Alhassan is again tipped to be in post, while Michael Ofosu Appiah, Godfred Yeboah, Shilla Illiasu and Michael Asante could form his back four.

The midfield duo of Yusif Chibsah and Edmund Owusu Ansah will be action as usual, while Charles Taylor, George Yamoah, Mark Adu Amofa and Douglas Nkrumah are likely to comprise the attacking machinery to bang in the needed goals.

Kotoko are just two steps away from the lucrative group stage and cannot afford to blow yet another chance.