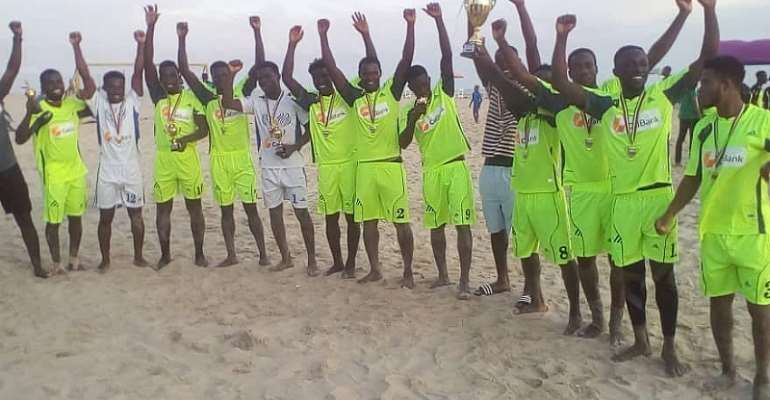 The Beach Sports Consult (BSC) has been commended for organising the third Homowo Beach Soccer Tournament at the Laboma Beach Resort in Accra.

Eight communities took part in the invitational tournament and Techie won the trophy at stake.

Although the BSC could not attract the sponsorship needed, the competition was keen and exciting.

It attracted a lot of spectators including Former MCE of La Dadekotopon Hon Odoley Sowah who appealed to the organisers to add female beach soccer to the programme next year.

Nii Sackey Narh, the hard-working organising secretary of BSC said the event was a success as they had a good crowd coming to watch and he expressed gratitude to the management of Laboma Beach Resort.

Jonny Hemans-Mawusi, one of the management members of BSC said they have come to stay to promote and develop beach sports. He announced that next year, the programme would be bigger as they are planning to add female beach soccer, beach volley and some athletics aka beach marathon.

Theo Armah, formerly of Obonu TV, another official of BSC hinted that the objective of the tournament is to unite the Ga Adangbe people and make the city clean to attract more tourists.

The former assistant national team coach of the Black Sharks said next year’s event is going to be organised better as they have realised their challenges, weak points and strong points.

Sammy Heywood Okine, media manager of BSC thanked the sports press who covered the 2019 Homowo Beach Soccer Tournament and appealed to companies to support sportsmen and women in Ghana.

“I congratulate GTV, GBC Radio, Obonu TV and Radio as well as Metro TV, HSTV, African Sports, ultimatesports.com, modernghana.com, newsghana.com, joydaddymultimedia.com, Happy FM, KFM TV and Rainbow Radio for the support. We hope that other media are going to support in the coming years” he expressed

He also thanked companies who have shown affection for beach sports and have promised to support next year.