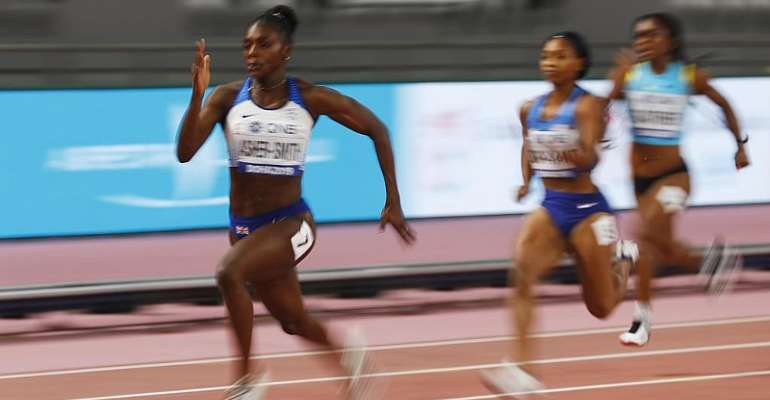 Dina Asher-Smith swept to the 200 metres title on Wednesday night to become the first British woman to claim a world championship sprint crown.

She finished in a British national record time of 21.88 seconds. Brittany Brown from the United States was second and Mujinga Kambundji from Switzerland claimed the bronze.

Asher-Smith, who won silver in the 100 metres, said: “It shows I held up well throughout the rounds. It was quite a tight timetable with six races in five days in quite humid conditions. It bodes well that I can come away with two medals and two national records.”

Holloway, 21, broke down in tears on the track following his victory.

Once he had recovered his composure, he dedicated his first world championship title to his father, Stan, and mother, Latasha, as well as the rest of what he called his inner circle. “They never bailed out on me,” he said.

“Some people did when I wasn't running well but that's life and those are the trials and the tribulations that you face.”

The 2013 champion Sergey Shubenkov was second and Pascal Martinot-Lagarde took the bronze to pick up France's first medal of the championships.

“Even if it's the smallest medal, it is a big medal for me,” said the 28-year-old. “At the Beijing world championships in 2015 I came fourth and at the 2016 Olympics as well. Those results were difficult to take. But this time I go home with something. I'm really happy.”

Failure
The defending champion Omar McLeod was at the other end of the emotional spectrum.

The Jamaican was disqualified after he clipped a hurdle and strayed into Orlando Ortega's lane.

The Spaniard, who appeared to be heading for a medal, was impeded and finished fifth.

“I've apologised,” said McLeod who revealed that he felt a tweak in his hamstring after taking the first hurdle. “I showed up ready to go. I showed heart. I came to defend my title.”

Poland's Pawel Fajdek of Poland defended his hammer title with a throw of 80.50m.

Quentin Bigot won the silver - France's second medal of the championships –and Bence Halasz of Hungary collected the bronze.