Asamoah Gyan And The Indian Adventure 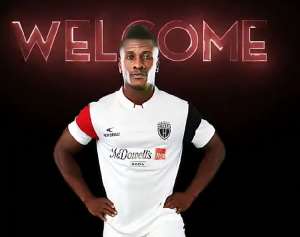 Asamoah Gyan’s move last week to Indian Premier League side, NorthEast United FC, very surprising for many fans of the Ghana captain who was least fancied to take his talents to a country noted more for its exploits in cricket and hockey.

The news succeeded in pushing Indian football onto the menu for Ghanaian football fans who may be wondering how their biggest football star of the last decade with previous experience in Italian Serie A, French Ligue 1 and english Premiership would consider India among all the available football destinations before retiring.

To some Ghanaians, little known Sulley Musah, may have started the exodus to India after he signed for East Begal FC in 1997.

The mercurial Ishmael Addo was also signed by East Bengal FC in 2008 as Ghanaian players found the world’s second-most populous country as a new haven to ply their trade.

The number of Ghanaian players moving to India dropped drastically after this era as Thailand became the new place of choice for Ghanaian footballers who wanted to play in Asia.

However, for close to a decade, football was literally not in existence in India.The south Asian country was best known for being a giant in cricket and probably for their diverse culture.

Football in India begun to take shape in the 1990s but it was not until October 21, 2013, that it became an official professional league after partnership with International Management Group from USA, as well as Reliance Industries and Star Sports.

The maiden season of the Indian Super League was played in 2014 with some of the top players in world football who had made their name already in Europe and were at the twilight of their career all going there for their last payday.

Italian legend Alessandro Del Piero, who had won the World Cup and several titles at club level with Juventus, signed for Delhi Dynamos at the age of 39. French striker Nicholas Anelka, who had played almost for all the big teams in Europe, signed for Mumbai City as the 12th club of his career. France 98 World Cup winner Robert Pires to come out of retirement at age 40 to sign for FC Goa, while stars such as Italy’s Marco Materazzi, Frenchman David Trezeguet, former England goalkeeper David James, among others, all featured for Indian clubs before retiring for good.

Ironically, Africa had a long-standing relationship with India in football before the big named European and South American players trooped to the country in the 2013/2014 season. Some players from East Africa had featured in the Indian league two decades earlier when few people across the globe knew football existed there.

In the last two years, the trend is changing again with Ghanaian players making moves to India after they successfully hosted the 2017 FIFA Under 17 World Cup. Football is gradually growing in the country and it is bringing in some good talents, as well as experienced players to their league.

At 33, Gyan is gradually at the twilight of his illustrious career that has seen spells at the highest level of European football, as well as Asian countries such as the United Arab Emirates and China.

Budget approval: NDC and Adwoa Safo’s PA engage in ‘It’s her...
8 minutes ago