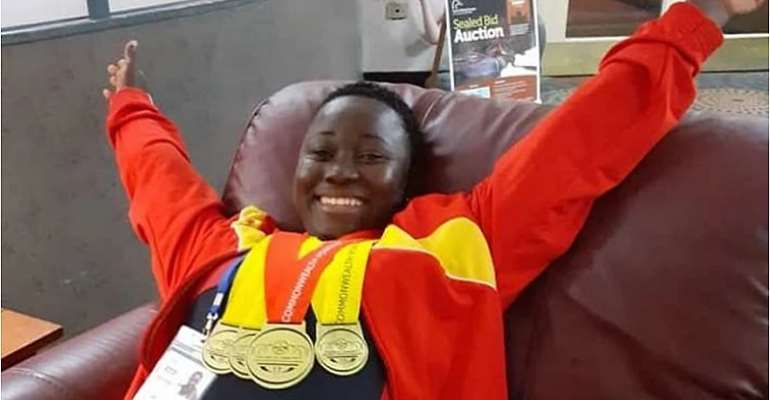 She achieved this enviable feat over the weekend at the 8th Commonwealth Powerlifting Championship 2019 at the Holiday Inn Hotel in St. John’s Newfoundland.

She lit the auditorium with a remarkable performance to sweep four award in the squatting, dead-lift and bench press phases of the prestigious competition – after nine brave attempts.

The 21-year-old's display was greeted with loud cheers from the spectators who had some Ghanaians among them.

“I’m really excited by this feat which without doubt is going to serve as the much-needed motivation for me to carve more laurels in the sport,” she told the Times Sports yesterday.

The young Mankessim-born powerlifter expressed profound appreciation to the President of the Ghana Powerlifting Federation (GPF), Godwill Joseph Agyeman, for the opportunity to compete with some of the finest in the sport.

“I’m really appreciative of this opportunity and looking forward to more of such events to make the nation proud,” she asserted.

That breathtaking feat made her the Ghanaian athlete to have won the highest number of medals in a single competition.

However, he fell out of favour with the leadership of the Weightlifting Federation in 2014 over unpaid per-diems and bonus when Ghana participated in the World Youth Championship.

Juliana Arko ventured into her newfound athletics three years later and she has taken Ghanaian powerlifting to another level.