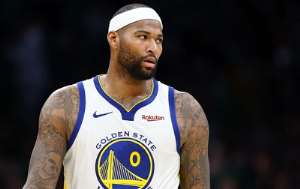 DeMarcus Cousins’ ex is claiming that he threatened her life the day before his wedding last weekend, according to TMZ.

According to the outlet, Cousins’ ex-girlfriend Cristy West filed a police report in which she claimed the NBA star said he’d “put bullet in [her] f—— head” after she told him their 7-year-old son Amir could not attend his wedding. Cousins married longtime girlfriend Morgan Lang in Atlanta, Georgia.

The Mobile Police Department confirmed that West filed a police report against Cousins and it is pending investigation.

West further claimed in court documents seeking a restraining order against the athlete that Cousins said he was going to kill her “even if he didn’t have to get his hands dirty doing it,” TMZ reported.

Further, TMZ said that West claimed in court documents that Cousins, 29, once allegedly choked her during a previous encounter. It is unclear in what court West sought the order of protection.

TMZ also obtained video of West and Cousins’ alleged phone conversation, in which a man can be heard saying the “bullet” comment.

In the footage, a cell phone call displaying Cousins’ name as the contact can be seen as a man — allegedly Cousins — says, “I’m gonna ask you this one more time before I take it to another level. Can I have my son here, please?”

After West responded “No,” the man-made the alleged threat.

Reps for Cousins did not immediately respond to PEOPLE’s requests for comments, nor did West.

Cousins — who plays for the Los Angeles Lakers but recently suffered an injury — married Lang at the St. Regis in Atlanta. He is also the father of a daughter, Vana.

The Los Angeles Lakers also did not immediately respond to PEOPLE’s request for comment, but according to NBA reporter Sam Amick issued a statement.

“We are aware of the allegation involving DeMarcus Cousins and, of course, take this claim seriously,” the statement said. “We are in the process of gathering information and will reserve further comment at this time.”