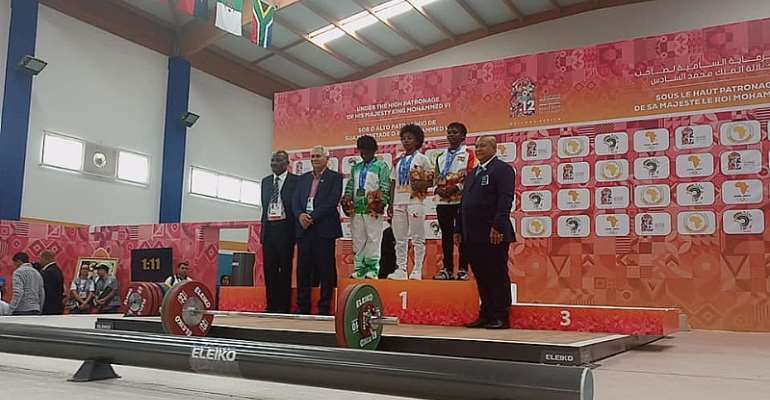 Winnifred Ntumi won 3 bronze medals in the women's Weightlifting 45kg at the Ennahda Hall, Sale over the weekend to put Ghana on the medals table.

She was very happy as the whole Ghanaian contingent has not got a medal after 5 days of competition.

President of the Ghana Weightlifting Federation, Ben Nunoo Mensah who is also the Ghana Olympic Committee (GOC) President was very happy that she won and the entire weightlifting team were elated for their achievement, praying to add more medals before the competition ends.

Ntumy, picked the bronze medals in both Clean and Jerk and Snatch as well as the overall bronze medalist in the women 45kg division, with a total score 126.

The 17-year-old West Africa Senior High School (WASS) graduate, goes into the records, as the first Ghanaian to win medal at the continental competition.

Ntumy, competed in the 45 kg category weighing 44.90kg and surpassed her Clean and Jerk of 67 kg at the African Championships, with a lift of 69 kg today at a much lighter body weight and made all six lifts successfully.

Rosina Randafiason of Madagascar was the proud of the gold medal with a total score of 156, having picked medals in both Clean and Jerk as well as Snatch.

She was followed by Stella Peter who had silver with a total score of 138.