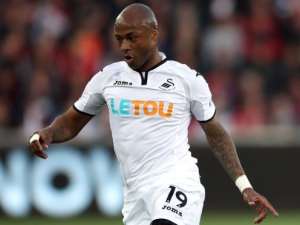 Swansea City and Ghana striker, Andre Ayew is set to be in contention for the Carabao Cup first-round tie with Northampton Town.

The 30-year-old has returned to training having been granted extra time off following the Africa Cup of Nations.

The former West Ham forward was linked away from the club during the summer transfer window after failing to join Fenerbache on a permanent basis.

Andre joined the Turkish side on loan from Swansea last season but failed to win the heart of the club at the end of the campaign.

Several clubs in Europe were after the signature of Ayew but failed to meet his demands.

However, the English Championship side were also desperate to offload the FIFA U-20 World Cup winner to cut down cost but couldn't succeed.

But the former Olympique Marseille star is now in contention for a starting place for the Swans on Tuesday evening.

On-loan forward Aldo Kalulu will be accessed after sustaining an injury in Saturday’s 0-0 draw at Derby.

The likes of Sam Surridge, Ben Wilmot, Kyle Naughton, George Byers, Yan Dhanda and Kristoffer Peterson could all be given opportunities if boss Steve Cooper opts to make changes.

Decision To Let Us Manage Ambulances Laudable--Ambulance Ser...
55 minutes ago