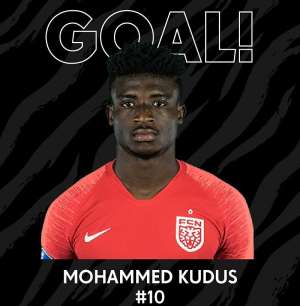 Ghanaian international, Mohammed Kudus was on target earlier today as Danish top-flight side FC Nordsjælland came from behind to draw 2-2 against Silkeborg.

The prolific attacker after missing the first two matches in the Danish Superliga through an injury looks to have found his feet and continues to impress for his side on match days.

He marked his return to the side with a sweet goal when they lost 3-1 to FC Copenhagen last week despite starting from the substitute bench.

Having convinced his manager that he was back to full fitness, Mohammed Kudus was handed a spot on Nordsjaelland’s team sheet in hopes of getting a win at home to help their challenge for the league title.

They were however shocked when Silkeborg took a two-goal lead in the first half. An improved second-half performance saw the Ghanaian finding the back of the net on the 52nd minute to get his side back into the game.

He was later replaced by Oliver Villadsen on the 76th minute following series of changes by manager Flemming Steen Pedersen to try and earn a point at the end of the match.

The changes paid off on the 79th minute when another Ghanaian, Francis Abu scored a debut goal to repay the trust of his manager who introduced him in place of Mads Aaquist.

The match ended two all with the Ghanaian duo proving to be vital to the setup of FC Nordsjælland.