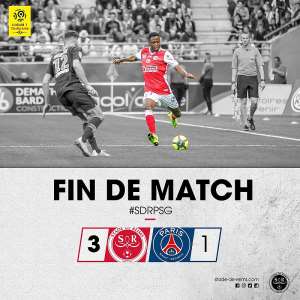 Hosting the Ligue 1 giants at the Stade Auguste Delaune, it was the underdogs who rose to the occasion to record an important victory over their opponent to give their fans something to smile about as the Ligue 1 season comes to its conclusion.

The Ghanaian International scored on the 36th minute to give his side the lead before fellow teammates Mathieu Cafaro and Pablo Chavarria added two goals in the second half to complete a resounding victory.

Ligue 1 player of the year, Killian Mbappé pulled one back for Paris Saint Germain but it was not enough to salvage anything out of the match for his side at the end of the 90 minutes.

Baba Rahman has been named amongst the 29-man provisional squad announced by Black Stars head coach James Kwesi Appiah last Wednesday. He is expected to mirror his excellent performance for his side for the past 6 months into the national team as they prepare to move to camp ahead of the 2019 Africa Cup of Nations (AFCON) tournament set to be hosted by Egypt.

Watch Baba Rahman’s goal against PSG in the video below: