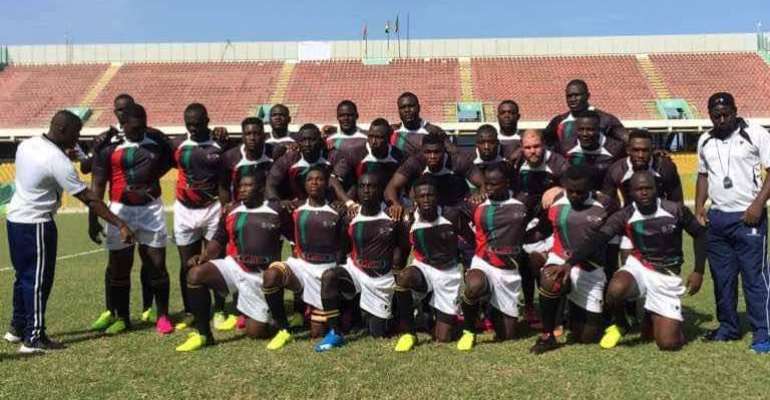 The Eagles of Ghana Rugby Union played a great game, but lost by a point against their counterparts from Cote d’ Ivoire in an international match played at the Paa Kwesi Nduom Stadium at Elmina in the Central Region.

The Eagles started very well and took a 10 goal lead and made it 10 -5 at half time, increased the tally to 15 -5 at 41 minutes before the Ivoriens found their rhythm and fought back fiercely to bring the scoreline to 15-10 in the 51st minute and equalized to 15 -15 after 56 minutes play.

The Ivoriens gained much confidence and composure as the match progressed at took the lead to make the scores 15 – 20 in the 69th minute. They increased to 15 – 23 with 15 minutes to end the game.

Ghana laughed last with a goal in the 79th minute to make it 22-23, however Cote d’Ivoire won the game.

The Ghanaians were cheered on by their officials including President Herbert Mensah who felt his players started well but got tired and lost concentration at a point in the game.

The game was sponsored by Interplast, Gino, PanAfrican Equipment Group and Sunda International.

President of Ghana Rugby Union, Mr. Herbert Mensah commended the players for their wonderful display and urged them to train harder as more international programmes are coming up.

The African Rugby executive member said its time to promote and develop Rugby in Africa, so that Africans can challenge the best in the world, noting that Africans have power and ability to excel in sports.

The Eagles of Ghana who were nominated for National Team of the Year at the 44th MTN SWAG awards played their hearts out, but the experience of the Ivoriens supported them to maintain the lead to win the game 22-23.