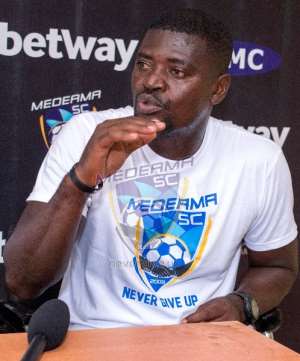 Medeama coach Samuel Boadu has been left saddened by the violent crowd trouble that marred his side’s 1-1 draw at Aduana Stars on Wednesday.

The two teams settled for a pulsating 1-1 draw at the Nana Agyemang Badu park, but not without controversy.

Irate fans descended on referee Emmanuel Eshun and his two assistants, as play was interrupted severally during the crunch tie at Dorma Ahenkro.

Marauding thugs threw missiles targeted at the match officials and the opposing bench, leading to officials running for cover on the pitch over claims of unfair officiating.

The Match Commissioner and the bench of the opposing bench were hit with several stones from the stands, with the assistants referees not being spared by the violent attack.

And Medeama coach Samuel Boadu has been left saddened by the turn of event.

“It’s sad that the game ended the way it did. We don’t need this in our football. I am very sad,” he said at the post-match conference.

“The Ghana Football Association has a lot of work to do to curb this phenomenon.

“We can’t continue to have such situation pertaining in our league centres. The two teams played well and gave their all. The end saddens me.”

However, the Disciplinary Committee of the Ghana FA Normalization Committee has placed a temporary ban on the Nana Agyeman Badu I stadium.