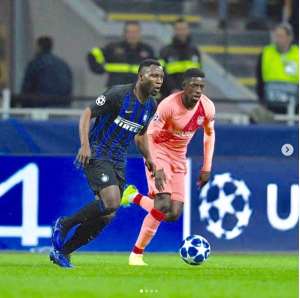 Ghana midfielder Kwadwo Asamoah has hailed Inter Milan's performance against Barcelona in the Champions League on Tuesday night at the San Siro.

Barcelona, without the injured Lionel Messi, took a late lead when substitute Malcom scored moments after coming on in the 83rd minute.

However, in form Argentine forward, Mauro Icardi got his side on level in the 87th minute.

The Ghanaian played the entire duration as the Spanish champions reached the Champions League knockout phase with two games to spare.

Inter remain second in Group B, three points ahead of Tottenham.