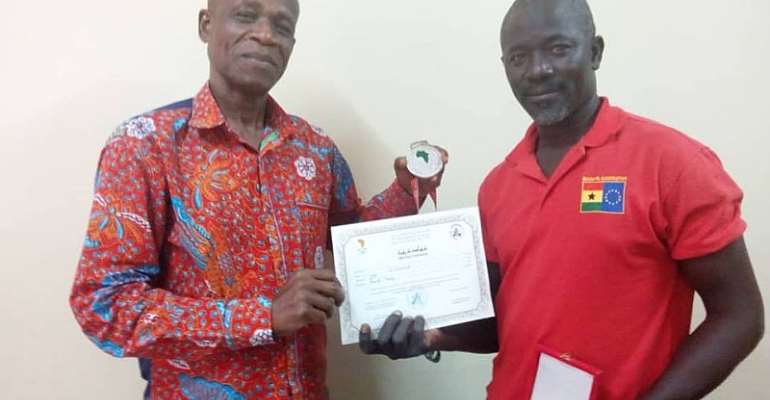 He elated coach who has been with the team for three years and has propelled them to become second best on the continent of Africa expressed sincere gratitude and gratefulness to all who supported them especially Champion Dishes at Adabraka in Accra Ghana who provided them with good food and motivation before they travelled to the championship.

According to coach Moro Mumuni, his player, Eric Tsatsu and Kevin Carboo were very committed to the course and were highly disciplined.

He hinted that the exposure they got from the 2017 Commonwealth Youth Games in Barbados where they placed fourth also benefited them, and they hope to shine at the Youth Olympic Games in Argentina come October 2018.

Moro Mumuni thanked Mr Atchoe and the GOC for supporting them to bring out their talents and exposing it to the world.

“Ghana has great potential, we can be the best if we get a little push by way of training matches,” said coach Mumuni.

Mr Paul Atchoe who is also the first Vice President of the GOC said he knew they were going for the gold, but he is happy with the silver medal, and hope they will go for gold at the next competition.

Ghana returned from the Africa Youth Games with a total of six medals from beach volleyball, swimming and athletics.

The female hockey U17 team placed fourth after reaching the medal zone but fell to Zimbabwe for the bronze medal.