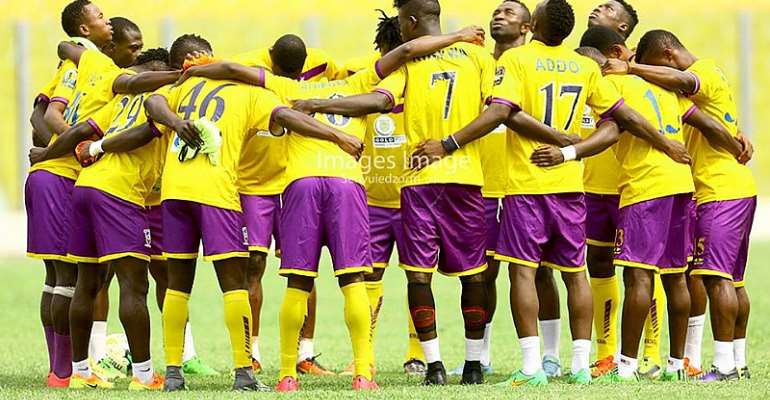 Head coach for Medeama SC, Samuel Boadu, has said his team is ready to play a possessive football to deal with the aerial threats of Accra Hearts of Oak in the ongoing Ghana League Club Association (GHALCA) G-8 tournament in Cape Coast and Kumasi Sports Stadium.

Medeama would take on Hearts in the second match of the competition at the Cape Coast Stadium on Wednesday.

In a pre-match interview, coach Boadu highlighted on the aerial threats of Hearts of Oak and how his team was prepared to deal with them.

'I have noticed that Hearts of Oak play flying balls because of their heights, so we have also trained in a way to play possessive football.

'We know that by keeping the ball on the ground we can hurt them with their aerial play and outwit them on Wednesday,' he added.

According to coach Boadu, his boys would soon buy into his ideas and philosophy as they seek to build a formidable team for the new season.

'It wasn't easy as a head coach with Medeama in my first game against Ebusua Dwarfs, we had to come from two goals down in the first half to win the game 6-5, which was due to motivation.

'We made some mistakes in the first game but it's a gradual process and we are not going to make the same mistakes again. I am sure if the boys stick to the tactics we would grow as a team'.

Coach Boadu who lauded the G-8 tournament initiative said the tournament is a good rehearsal ahead of the coming league.

'It is good to have such tournaments before the start of the league, it points out details to coaches and where a team needs to improve on and I am glad Medeama SC is partaking in this tournament.

Medeama SC would take on Accra Hearts of Oak at the Cape Coast stadium on Wednesday 10th January 2018 at 1500 GMT, with Kumasi Asante Kotoko taking on Dreams FC at the Baba Yara Sports Stadium in Kumasi.