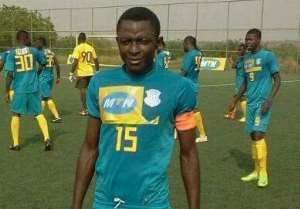 'For now, I can confidently say former Wa All Stars Captain Hafiz Adams is at Dormaa with the club and started training with us this morning.

According to coach Yusif Yakubu, his club was in talks with other top players, but cannot reveal all until they conclude with signings.

'The management is having talks with so many players to augment the already strong team we have, but I must respect management for them to make things concrete before talking about them.

Yusif said 'having qualified to play in the continental competition, we must get a strong squad to compete for both the local league and the continental games and it is our aim to raise the flag of Ghana high when we represent the country.

The highly-rated defender, who spent eight seasons with Wa All Stars after he graduated from their youth side to captain the team, would help the Dormaa based club to impress in Confederation of African Football (CAF) Champions League, an elite club competition on the continent.

I'll hand over power to the next elected president on 7th Ja...
51 minutes ago