I Want The Other Two Belts Out There – Anthony Joshua 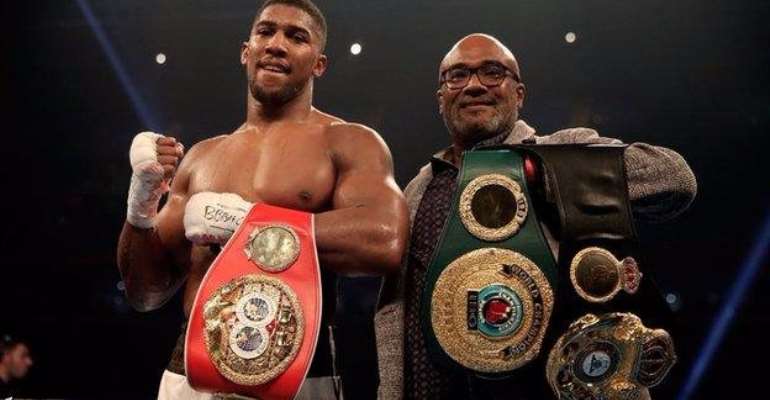 Anthony Joshua says "the possibilities of 2018 are great" after cementing a record-breaking year with a dogged win over Carlos Takam.

The British WBA and IBF heavyweight champion built on his April win over Wladimir Klitschko by stopping Takam in 10 rounds at a captivated Principality Stadium in Cardiff.

His promoter Eddie Hearn says a meeting with WBC champion Deontay Wilder "has to happen", while coach Rob McCracken hopes a bout against WBO king Joseph Parker presents itself first.

"The possibilities are bubbling nicely in the distance," said Joshua, 28. "I'm not worried about 2018 because of the potential possibilities to come.

"I want the other two belts out there, whether it's Wilder first or Parker."

Both bouts - but Wilder in particular - would serve to elevate Joshua's seemingly unstoppable rise through global sport further.

A smooth-talking Briton versus a flamboyant American, both raw in the ring, both powerful. What is not to like? The sooner it happens the better.

Or maybe not. Takam - though well beaten and aided when he damaged the champion's nose after a head collision - perhaps showed enough resistance to deploy brakes of caution on the Joshua bandwagon when the dust settles.

"He wasn't at his best, but you won't always be - and it's those times you have to find a way."