The race for the Premiership begins Today 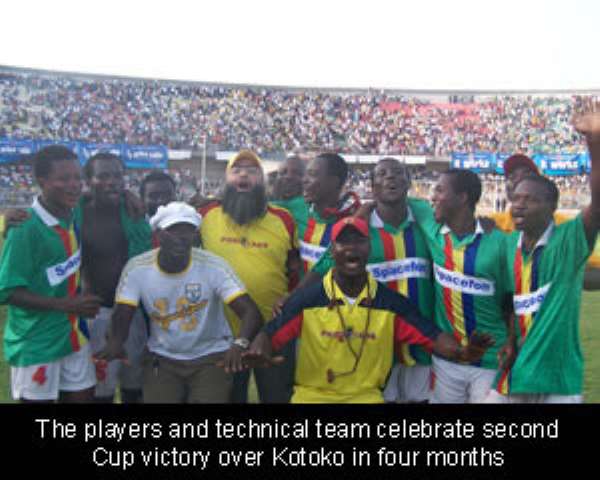 The soccer crazy nation would today witness the return of the National Premier league as all the 16 Clubs go into action in search of honours at all the league centres. The occasion is coming as a big relief for soccer fans when they were limited to a zonal league system that denied them the pleasure of witnessing the most cherished matches between rivals, Accra Hearts of Oak and Kumasi Asante Kotoko during the 2004 season. With the reversal to the normal league system this year and a whooping sponsorship amount of 4.3 billion cedis sponsorship from Ghana Telecom as well as an exciting Gala competition, there is no doubt that this year's Premiership would provide fans with series of exciting matches to revive their enthusiasm of the game. The level of performance displayed by the clubs during the two day Gala competition again further confirms the nature of competition to be witnessed this year.
Perhaps, the only thing that would be missing from the scene is the absence of Accra Great Olympics who would be participating in the Division One league following their relegation from the Premiership. This notwithstanding, the first week is definitely going to see keen competition at all the league centres. The focus of all would be at the Berekum 'Golden City" Park where Berekum Arsenals are expected to provide a stiff opposition to the 2005 Gala lords, Kumasi Asante Kotoko, as they often did since they joined the elite league, whilst Kotoko on the other hand would be seeking to maintain the excellent form they displayed in the Gala. Kotoko have, however, on many occasions survived the scare of the Berekum lads and come out with respectful victories, hence Sunday's encounter would not be different from other occasions. The game would be very crucial to Kotoko as it would serve as a confirmation to their fans that the team has gained full recovery from the shocking defeats suffered at the hands of archrivals Accra Hearts of Oak in both the domestic and continental levels. Confederation Cup campaigners, King Faisal seem to have been handed a relatively easier task as they clash with Tano Bofaokwa at the Kumasi Sports Stadium. This is because the "Gruzah boys" have for the past weeks displayed an impressive form which saw them recording a favourable result in their match against Bendel Insurance of Nigeria at the continental level last Sunday. Top Four champions, Kpando Heart of Lions might have a difficult task in their opening match against Real Tamale United (RTU) at the Kaladan Park, Tamale, which has been a waterloo for almost all clubs irrespective of their form. AshantiGold seem to have rediscovered their form after many years of under- performance, but whether they can sustain their new form in the league remains the biggest question to be answered as they come up against Liberty Professionals at the Obuasi Len Clay Stadium. Sekondi Hasaacas, though playing at their favourite Gyandu Park would find Power FC a hard nut to crack, whilst Real Sportive and Okwawu United would battle in a match of equals at the Tema Sports Stadium. The two newly promoted sides, Kade Hotspurs and Ebusua Dwarfs would not have the luxury of playing their first matches at home as they are scheduled to trek to Accra and Swedru to face Feyenoord and Hearts respectively.
For Hotspurs, a little bit of hard work at Swedru would see them at least picking a point against the Feyenoord lads, whilst it would seem difficult for Dwarfs to leave the Ohene Djan Sports Stadium unscathed. 14 April 05