GHALCA to advance C200m to clubs towards Top 4 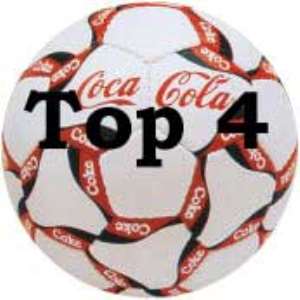 Accra, Dec. 15, GNA - The four clubs participating in the Ghana League Clubs Association (GHALCA) Top Four competition, scheduled for January 23 to February 16, next year, are to receive 200 million cedis each to prepare for the crunch duels.

In addition, the winner takes home a cash of 100-millions; the runners up 75 million cedis, while the third and the fourth teams would receive 50 and 25 million cedis respectively.

Mr Cudjoe Fianoo, Administrative Manager of GHALCA who made this known to the GNA Sports on Wednesday after a meeting with representatives of the participating clubs: King Faisal; Asante Kotoko, Hearts of Oak and new entrants, Kpando Heart of Lions.

He said the Association was yet to conclude talks with Coca Cola, the main sponsors of the competition over a proposal to increase the sponsorship package from 1.2 billion cedis to 1.5 billion cedis for the three-week competition.

The Association has projected two billion cedis from a number of sponsors, which include cellular phone operators- Spacefon to make the competition very attractive.

While waiting to finalise the deal with the sponsors, GHALCA will on Friday release 50 million cedis each of the clubs as part payment of the money meant for preparation.