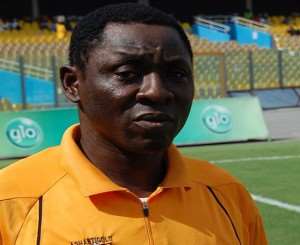 
Kotoko striker David Duncan has urged his players to eschew complacency ahead of the new season.

The Porcupine Warriors are hugely touted as the hot favourites for the Premier League crown following a fabolous run in pre-season.

The club has suffered only a defeat and run amok with several wins in pre-season.

But coach David Duncan is urging calm among his players ahead of the start of the new campaign.

'You can have a lot of disappointments for a number of reasons,' Duncan told Joy FM.

'We don't supervise the players, as far as their lifestyle is concerned, maybe you the players can get carried away by the environment.

'The competition as a matter of fact hasn't started, I have been around long enough to know that you take one game at a time.' 'We don't let that get into our heads, there is a lot of work to be done.'

Kotoko will open their 2015/16 Ghana Premier League campaign with a tricky tie at WAFA.