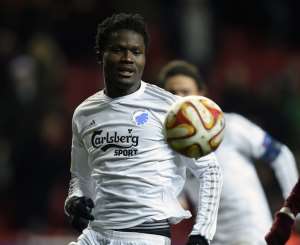 Solbakken, a former Wolverhampton Wanderers manager, says the versatile teenager has more to learn to play in a top league.

Amartey has been linked with Manchester United and Liverpool this season.

But Solbakken told Bold: “All players are for sale if the price is right, but Daniel cannot play in England now, he has not played enough international matches and doesn’t have enough experience to play in the Premier League.

“He still has much to learn with FC Copenhagen, but also needs to play more international matches and European matches to gain international experience to succeed in England, and I do not think there are many clubs in the Premier League which would fetch him now.

“He has risen rapidly, and it is great for such a young player. He undoubtedly has some interesting qualities, but he will not go to a big league yet, it is too early.”

Amartey was a revelation at the 2015 Africa Cup of Nations where he emerged as a quality replacement for injured John Boye.

The former Inter Allies player can play as a centre-back, defensive midfield and a right-back.