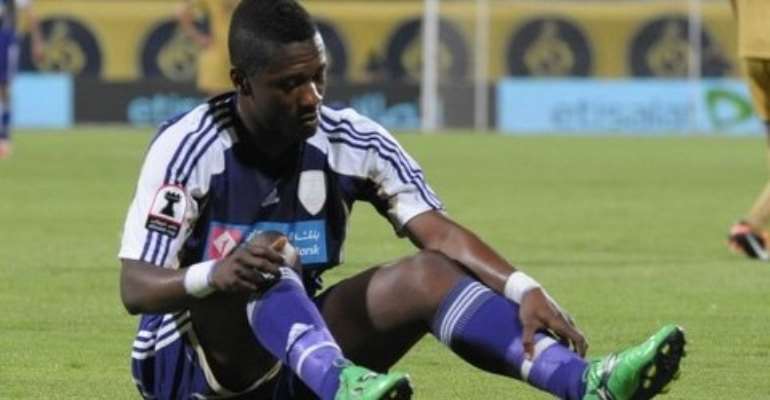 Ghana captain Asamoah Gyan is not fully fit, which is why he played just a few minutes on Monday in the Arabian Gulf League.

Al Ain played a goalless draw away with Al Wahda, with the the Black Stars skipper coming on as a 74th minute replacement for Ibrahim Diaky.

Gyan had gone back to the Emirates on Saturday after overseeing his boxer, Emmanuel 'Game Boy' Tagoe, win his bout under the auspices of the Baby Jet Promotions - which the player owns.

But Al Ain coach Zlatko Dalic says the player is not completely fit.

“Certainly, Gyan is the team’s top scorer, his readiness has not been completed by 100 percent, due to the injuries he suffered,” Dalic said.

Dalic also pointed out that Gyan i being rested for crucial latter stage Asian Champions League (in which he has two goals this season) and President’s Cup games.

“Finally, what drives us to maintain the player, as much as possible, even with a full degree of readiness, which requires us to give him some time to stay fit for the President’s Cup and the AFC Champions League.”

Asamoah has scored 'just' 13 goals this season - 'just' because in the last three seasons he was well within the 20 goal mark by this time.