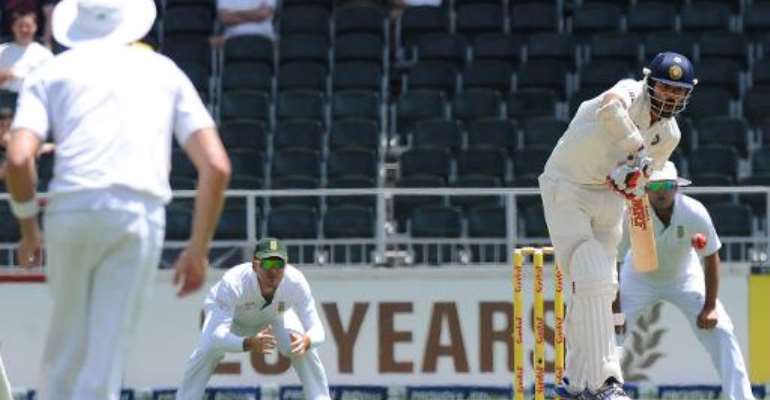 Indian batsman Shikhar Dhawan (right) plays a shot from South African bowler Venon Philander on the first day of their Test match in Johannesburg at Wanderers stadium on December 18, 2013. By Str (AFP)

Johannesburg (AFP) - Virat Kohli led an Indian fightback after the tourists lost two early wickets on the first day of the first Test against South Africa at the Wanderers Stadium on Wednesday.

India were 70 for two at lunch after Kohli (32 not out) and Cheteshwar Pujara (18 not out) put together an unbeaten 46 for the third wicket.

Earlier, Dale Steyn and Morne Morkel took a wicket apiece as India slumped to 24 for two.

Steyn dismissed Shikhar Dhawan for 13 and Morkel claimed the wicket of Dhawan's fellow opener, Murali Vijay, for six as the Indian batsmen were subjected to a testing examination from the South African pace attack.

Indian captain Mahendra Singh Dhoni showed confidence in his inexperienced batting line-up when he chose to bat on a well-grassed pitch after winning the toss.

It was a typical Wanderers pitch, offering pace and bounce without giving the bowlers undue assistance.

For the first half hour, Dhoni's confidence seemed justified as Vijay in particular showed good judgement in leaving as many balls as possible and defending solidly when necessary.

But the left-handed Dhawan showed vulnerability against some well-directed short-pitched bowling from Steyn. After a couple of false strokes, Dhawan top-edged a hook to backward square leg where Imran Tahir took a good catch.

Morkel, who came on as first change, gave Vijay a torrid time with some sharply-lifting deliveries before having Vijay caught behind by AB de Villiers off a fuller one.

Vijay had only two scoring strokes in making six off 42 balls.

Morkel had figures of one for one off five overs before Kohli top-edged him over the slips for four.