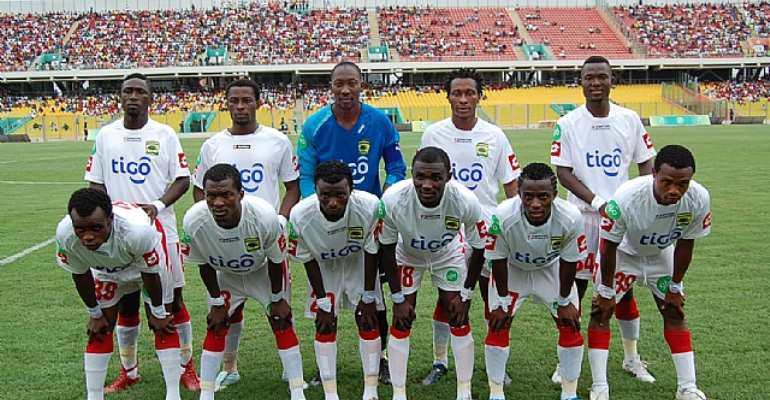 The 'Porcupine Warriors' Kumasi Asante Kotoko are in full control of the 2011/2012 Glo Premier league as they have stretched their lead on the ladder to a maximum ten points can clearly be described as the runaway winners.

The red army defeated Mysterious Ebusua Dwarfs yesterday at the Obuasi Len Clay Stadium by a stormy 2 – 0. The fabulous boys scored in each half through in form Kofi Nti Boakye and Ben Acheampong to shut Dwarfs who were playing home away from home haven't been ban by the PLB for crowd hooliganism.

At the Accra Sports Stadium C.K Akonnor's dream of picking a point in his first match as the head coach of Glorious Accra Hearts of Oak was shattered by Kwame Boahene's 76th minute equalizer.

The two teams fought for all the juice in football especially in the second half but the phobian's dominated large swatches of the second period after a turgid opening half and were perhaps unfortunate not to garner greater riches from the day as their former player, Boahene came from the bench to win the day for Liberty thus leaving them with just a win in five matches in the second round.

Soccer Miners, Ashantigold fc defied all odds when they defeated Hearts of Lions 2 – 0 at the dreaded Kpando Park to keep their 100% record in the second round alive. Ashantigold took the lead as early as the sixth minute through Mohammed Yakubu before Daniel Asamoah added his name on the score sheet in the 45th minute.

At the Nana Gyamfi Park in Bekwai, 'Edubiase Messi', Emmanuel Baffoe's second half strike was enough to secure the three maximum points for New Edubiase united and to increase his chart on the goal king log to 16 goals.

Shaffiu Mummuni's 78th minute goal helped relegation zoned Wassaman united to pull even with a 10 man Aduana Stars at the Tarkwa T&A Park after Aduana had taken the lead in just three minute into proceedings through Richard Arhin.

At the Accra Sports Stadium on Saturday, Mighty Jets hopes of grabbing three points was twattered by Kwabena Adusei and Hans Kwofie's strikes in the second half to give the visitors a 2 – 1 victory.