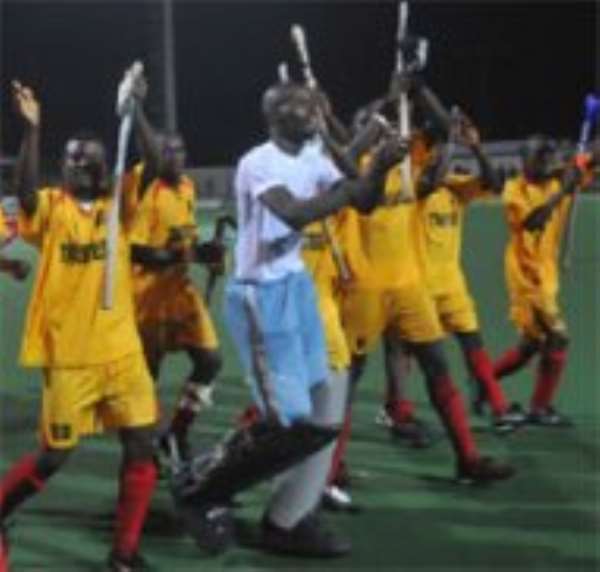 Ghana's historic conquest of African youth hockey last February in East London, South Africa, which was the country's first youth gold in 32 years, and producing two club finalists at the 22nd edition of the Africa Cup for Club Championship in Accra, will go down as some of the country's indelible achievements in hockey.

The Under-17 achievement, which also qualified Ghana as the continent's representative in the male category at the maiden Youth Olympics in Singapore, was Ghana's first after a similar feat chalked up at the under-20 level in 1978 in Nigeria to earn the country a ticket to the world event in France.

The South African experience was awesome. Host South Africa and Egypt were always the continent's favourites at any level, but the young Ghanaians proved that where there is a will, there will always be a way.

Head Coach, Edmund Aryeetey, fully aware of the technical astuteness of the North and South Africans, designed a compact system to confound his opponents. It was an energy-sapping system which required only players with speed and stamina.

So the Ghanaians, arguably stronger than their opponents, won all their matches at the last quarter of the games. After stopping Egypt at the penultimate stage, the boys, captained by Alfred Ntiamoah and inspirational playerJonny Botsio, went deep into their reserve to strike what was most important to outwit the South Africans in the final.

Ghana won the crunch encounter 4-2 on penalty strokes, but that was not the end of the story as promising star Botsio emerged the tournament’s best player and top scorer to put the icing on the cake for Ghana.

However, while the male team shone, their female counterparts were a bit shaky, lacking the needed cutting edge to break through. That division was easily won by South Africa who, together with Ghana's male team, made history as the continent's representatives at the maiden Youth Olympics.

But at the Olympics the difference was clear. The Ghanaian team, although placed fourth among very competitive sides, realised there was a lot to still learn from powerhouses such as Australia and Pakistan.

At the world stage when much was expected of Botsio, for instance, he simply froze, while the South African ladies became the whipping girls of the competition. They failed to win a single match and demonstrated that, indeed, they were not ready at that level.

NDK HOCKEY LEAGUE:
The Greater Accra Hockey League was almost going to be played without a sponsor following the last-minute withdrawal of the headline sponsor, IPMC.

But just then NDK Financial Services, a non-bank financial institution, whose Chairman, Oko Nikoi Dzani, is the President of the Ghana Hockey Association, stepped in to save the situation.

The company subsequently signed a two-year renewable contract for 20,000 Ghana cedis to help run the league with the promise of supporting it with other logistics.

Trustees, who had not won the league for about a decade, had one of their successful seasons yet, with the late Coach Henry Fynn as the main architect of the team's success story.

With the inclusion of about four key players from the Armed Forces team who could not raise a team because most of their players had gone on a peacekeeping mission, Trustees became one of the fearsome sides, and their victory was not a surprise.

Salya Nsalbini, Nene David Ghablah, Joseph Blankson, goalkeeper Osumanu Abdallah, were crucial in charting a new course for the SSNIT boys. Unfortunately, the man who qualified the team, Fynn, died before the start of the 22nd edition of the Africa Cup for Club Championship which was held in Accra.

With barely a month to host the December 9-18 competition the Ghana Hockey Association formed a number of committees, including one on the media, to host a memorable tournament.

The near-perfect hosting featured 13 clubs made up of six male teams and seven female teams from four countries — Ghana, Kenya, Nigeria and Egypt.

For the first time, two Ghanaian clubs, (male and female)— Trustees and Extinguishers — qualified to play in the final. Unfortunately they missed out on the gold medal after Trustees were whipped 4-1 by Sharkia and Extinguishers annoyingly lost 2-3 to Heartland of Nigeria in the final. Share Your Thoughts on this article Name Email Location Comments Graphic Ghana may edit your comments and not all comments will be published

I haven’t said NPP is Majority in Parliament – Bagbin clarif...
35 minutes ago