Families Of May 9 Victims Call For Transparency 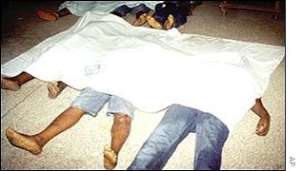 The Surviving victims and families of May 9 Accra Stadium tragedy have called on government to make public the modalities it used in determining the entitlements of beneficiaries of the Stadium Disaster Fund. Speaking at a press conference on behalf of the group known as May 9 Accra Sports Stadium Disaster Association in Accra yesterday, Ms Sakinatu Suka-Braimah also asked the government to clear the air about how much had accrued to the fund, so far.

She said media reports at one stage indicated that the fund accrued ¢3.3 billion while government had decided to donate ¢300 million to the fund.

According to Ms Suka-Briamah, Mr Amponsah Bediako, a Deputy Government Spokesman told Joy FM that ¢ 3.3 billion accrued to the fund.

However, she said, the expenses totalling ¢1 billion was not made known to them. She noted that it was only on Monday that, Mr Amponsah-Bediako said on Joy FM that, the monies were taken from the fund to cater for the burial, funeral and medical expenses of the bereaved families and the injured.

Ms Suka-Briamah added that everything concerning the disbursement of the funds has been shrouded in secrecy and wondered why the government has labelled the monies given to be paid the victims and relatives of the disaster as ex-gratia.

This, she said is because, the government is not doing any of the victims involved in the stadium tragedy a favour, but holding monies donated by well-wishers in trust for the victims.

She said, the ¢5 million that would be given to surviving victims and their families, including the ¢10 million to the families of those who died without children and an amount of up to ¢10 million for those who got injured is not enough.

She emphasised that the surviving victims and families will honour the invitation for the disbursement of the fund today, but stated that, “we want the government to know that the monies were donated in our names and we are collecting everything that is due us up to the last pesewa”.

On the issue of the scholarship scheme for the orphaned children of the victims, the association lauded the idea but expressed concern about how government was going to implement such a scheme.

She also said the association will like to know how government was going to cater for the needs of the victims through the revolving fund that the Special Assistant to the Minister of Information and Presidential Affairs, Mr Ferdinand Ayim talked about when he said that, "a substantial amount of the stadium relief fund would be used to set up a revolving fund to meet the educational needs of the orphans."

She said the association is concerned about the future of the fund when the government of the day is out of power, and those named to manage the revolving fund are no more in any public position.

Ms Suka-Briamah asked the government to name members of the five-member trustees who are to manage the revolving fund.