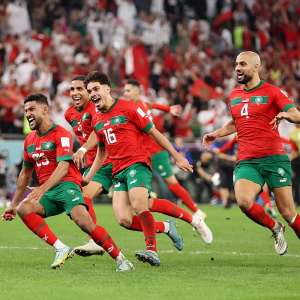 The stage is set for the 2022 FIFA World Cup to enter the quarter-final stage following the wrapping up of games in the Round 16 stage.

Gradually, this year’s mundial which started in Qatar on November 24 has shaped up with the boys being separated from the men.

On Tuesday night, the two remaining matches in the Round of 16 were played. The first match was a game between former World Champions Spain and African side Morocco.

In a game that ended with no goal at the end of extra time, goalkeeping heroics from Morocco’s Bono help the Africans to secure a 3-0 shootout victory to advance to the quarter-finals.

The feat means that Morocco are the fourth African country to reach the last eight stage of the FIFA World Cup.

Later in the night, 2016 European Champions Portugal took to the field to face off with Switzerland.

Unfortunately, for the Swiss, Portugal had too much quality and came to the party ready to fire from all angles.

Courtesy of a hat-trick from Goncalo Ramos as well as goals from Pepe, Raphael Guerreiro, and Raphael Leao, Portugal cruised to a thumping 6-1 win at the end of the 90 minutes.

Defender Manuel Akanji netted the only consolation goal for the Swiss. With the result, Portugal now will face Morocco in the quarter-finals of the 2022 FIFA World Cup.

Already, France have set up a date with England while the Netherlands are scheduled to face off with Argentina.

Check out all the quarter-final games in the attachment below;

The tournament after today is going on break for two days to give the qualified teams the chance to adequately prepare.

On Friday, Croatia will take on Brazil in the first quarter-final match at 15:00GMT before Netherlands lock horns with Argentina at 19:00GMT.