Ensuring fairness in the De-luxy Professional Boxing League: Role of referee and judges 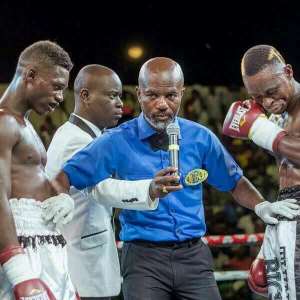 The role of the referee is to ensure fairness, and equity and determine a clear winner.

The Referee gives instructions to both boxers in red and blue corners before the fight commences.

He determines when to start or stop a count when a fighter is down. He also determines when a foul is so egregious that a warning should be given or points are taken away. Signals when the round is over.

Referee in boxing has a vital role because he is nearest to the action, so he sees everything more than people sitting at the ringside.

Since boxers must live to fight again on another day, he must save boxers who are in danger in the ring.

In the past, referees were involved in judging the fight. However, that role has been progressively replaced by a panel of judges, except for domestic fights in some countries.

The Judges record points after each round and send them to the Referee who declares the winner.

Ghana has seen great referee judges like Ataa Eddie Pappoe who rose to become an international figure officiating World Title bouts all over.

There is also Roger Barnor who is now the Second Vice President of the Ghana Boxing Authority (GBA) and a few like Michael Neequaye who have excelled in the passionate profession.

In recent times, new officials have come on board to increase the number, but as we accept the quantity have we observed the quality of officiating.

The De-luxy Professional Boxing League has been drawing crowds at Fight Nights, but on a few occasions, the fans have not been satisfied with the verdicts.

At the very last Fight Night 16, the fans created chaos which was sparked by the decision of officials.

The officials play a key role in determining the winner of a bout, so they should judge fairly.

The promoters, Imax Media Promotions were not happy with the incident and are investigating what caused the turmoil and finding solutions, because boxers must fight to live and boxing fans must have some entertainment to enjoy.

The boxing gyms and coaches must also be educated to know the laws and rules as well as regulations and apply them at the right time.

Some people who also love to spoil things or want to be labeled as hooligans must know that when they commit, they will be dealt with, so they should not come near where sports fans are having fun.

Also May 9 and other disasters in the world, sports fans should learn some lessons, and be guided or practice safety modes.

The Imax Media Promotions organized De-luxy Professional Boxing League has been wonderful, well patronized, and well packaged, so it has attracted people from far and all walks of life.

With just four Fight Nights to go, there must be perfect officiating to determine a genuine winner of the Renault car at stake for the best gym and best boxer.

The GBA must not be sympathetic in punishing those who flout the laws, because boxing fans and all stakeholders want the best.

Although there might be a few mistakes, corrections and amendments must be made for better competition in the coming seasons.

As I salute Imax Media Promotions, I also want other promotions to work harder by partnering with media houses (TV Stations) to promote boxing in Ghana.

I am informed Imax Media Promotions and the GBA are meeting to find answers to the questions of hooliganism and violence at the Bukom Boxing Arena on Fight Night 16.

I wish them well and pray that the first season of the De-luxy Professional Boxing League will end successfully, with all the participating gyms and boxers happy and satisfied.