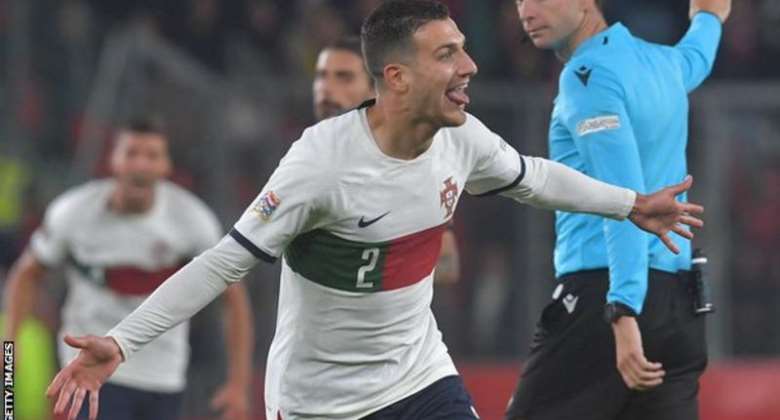 Right-back Diogo Dalot had not previously scored an international goal

Diogo Dalot scored twice as Portugal boosted their hopes of qualifying for the Nations League finals alive with victory over the Czech Republic.

The 2019 winners took full advantage of Spain's loss to Switzerland to move two points clear at the top of Group A2.

Portugal must avoid defeat in their final group match against Spain on Tuesday to reach next summer's finals.

Needing to avoid defeat in Prague to give themselves a shot at qualification against Spain, Fernando Santos' side responded emphatically to losing their previous Nations League match against Switzerland in June.

Czech forward Patrik Schick was unable to halve the deficit from the penalty spot before half-time after Cristiano Ronaldo was penalised for handball.

That allowed right-back Dalot to put the game out of reach seven minutes after the restart with a superb left-footed finish from outside the box, before Liverpool's Jota headed in with eight minutes remaining.

Ronaldo, who assisted Jota's goal as he headed a corner into the six-yard box, required treatment in the first half after suffering a blow to the face in a collision with Czech goalkeeper Tomas Vaclik.

The Czech Republic fell to the bottom of the group and must beat Switzerland in their final match to avoid relegation to League B.

What again do you have for Ghanaians besides economic theori...
16 minutes ago

Your plan to buy oil with gold instead of USD bogus; you're ...
54 minutes ago