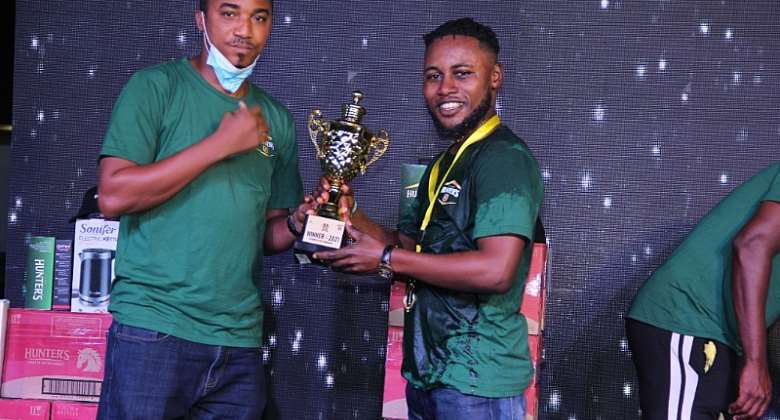 Frank Sullivan from Malibu Pub in Takoradi has emerged Ghana's Pool champion with victory over Edward Ghunney. The two were part of the last men standing at the Accra Sports Stadium Lawn tennis in the 2021 edition of the YFM/ Hunter’s Pool tournament.

Speaking on his victory, Frank said: " When I was by the snooker table playing, I didn't think for one moment about the GHc 10000 cheque but of course when we finished playing and I won, it was very nice. I want to thank YFM and Hunter’s for giving us this opportunity. We play pool competitions but we win nothing, but today my passion has been rewarded and I hope we will at one time get to a point where pool is competed in the Olympics."

The newly crowned champion walks away with GHc 10000, a trophy, a gold medal, boxes of Hunter’s, branded cue sticks among other prizes from sponsors.

The finals of the YFM/ Hunter’s pool tournament came off at the Accra Sports Stadium Lawn tennis court with 24 pool players who qualified from Eastern, Western, Ashanti and Greater Accra regions during the preliminary stages of the competition.

The YFM/Hunter’s Pool tournament, organizers say the competition was curated to give Ghanaians quality entertainment post-COVID-19 and give relevance to the pool game in Ghana.

Manasseh Kwafo, Project lead for the YFM/ Hunter’s Pool tournament explained the rationale behind the tournament.

"We went round the country during the preliminary stage and you could see that people were craving for the full return of sports. The pool game is a contactless sport and very captivating to watch.

Today's final was something else, the showmanship, energy, strategies were a delight to watch. I was really impressed with the turnout from beginning to end. Congratulations to all the participants and the winners.

The finals began with the 24 finalists competing in the knockout stage, for a slot in the second round. Twelve players qualified for the second round of the finals and six players made it to the third round, with Frank Sullivan from Malibu pub who became the ultimate winner, Edward Ghunney also known as “Jet Li” from Hot Gossip who placed second and got a silver medal and other consolation prizes.

Samuel Indubusi from Purple Pub who placed third also won a bronze medal and consolation prizes. The final was as nerve-wracking as it was thrilling to watch between “Jet Li” and Frank. They played five games with Edward winning two games and Frank winning three games giving him the bragging right as the king of pool in Ghana.

Jude Matti Marketing Manager at Kasapreko on his part thanked the participants for putting themselves out there.

"When you dream of a concept, you need people to believe with you and bring it to life. If the players didn't put themselves out there we won't have great events across the regions and a greater final. We appreciate them, they are all winners."

He also mentioned that as a brand, their focus is always their clients.

"We know people love Hunters and our other Kasapreko brands, giving them wholesome entertainment is how we show our love. We know you have been entertained. As a brand we will always support worthy causes, through the pool tourney we have helped showcase and have highlighted a game with so much potential of putting Ghana on the world stage.”