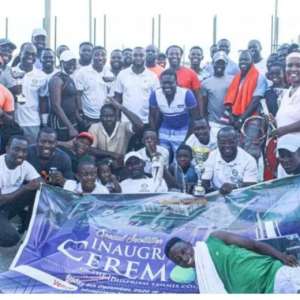 Anglogold Ashanti Iduapriem Tennis Club on Monday 27th December 2021 inaugurated the new executive board that will steer the affairs of the club for the next two years (From January 2022 to January 2024).

The Senior Manager- Sustainability, Mr Stephen Adjei was appointed as the Chairman of the Iduapriem Tennis Club and expected to continue the good works of(Senior) Engineer Isaac Boakye Aduenin who has been at the helm of the tennis club since 2019.

Under the stewardship of(Snr.) Ing. Boakye Aduenin, the Iduapriem Tennis Club was officially opened and oversaw the construction of two ITF standard tennis courts and also the provision of shelters for members. All tournaments hosted by Iduapriem tennis club were corporate sponsored, further underpinning the attractiveness of the club to corporate Ghana.

Speaking to this reporter, the newly appointed chairman of Iduapriem Tennis Club Stephen Adjei said, “I'm privileged to be at the helm of affairs of Iduapriem tennis club, the previous administration did a lot for them and it’s time for us to continue the good works’.

He added, our focus is to harness more talent among the kids and host more Social and Junior tournaments. All tournaments will be sponsored.

Akufo-Addo cuts sod for $90million University of Engineering...
43 minutes ago