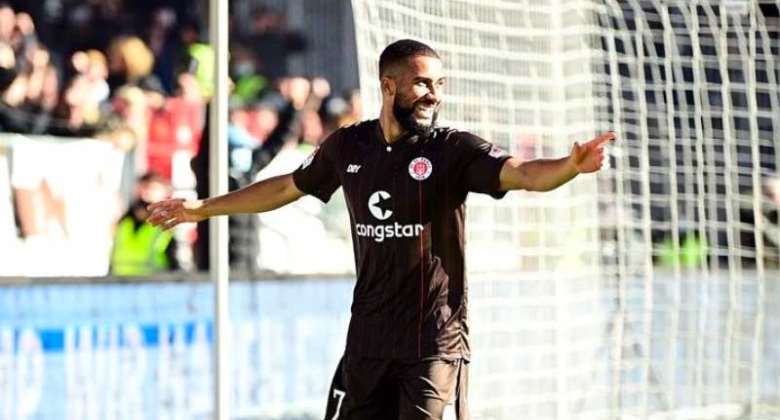 The Black Stars forward has been one of the most in-form Ghana players abroad since the 2021/2022 football season commenced.

Last weekend, he was in the top 10 highest rated players abroad list put together by Modernghana Sports and its partners SofaScore after assisting a goal in the big win against Heidenheim.

On Sunday, October 24, 2021, Daniel-Kofi Kyereh once again glittered for FC St. Pauli when the team hosted Hansa Rostock on matchday 11 of the German Bundesliga 2 campaign.

In addition to his stellar display, the forward scored his team’s second goal of the game to inspire the side to record a massive 4-0 win at the end of the clash.

Having played 83 minutes yesterday, Daniel-Kofi Kyereh bowed out with a high rating of 7.8, the highest score by any Ghanaian player that features for their club over the weekend.

As a result, the German-based player is the top-rated Ghanaian player abroad in this edition of the wrap on players by the Modernghana Sports team.

In the top 10 list, Daniel-Kofi Kyereh is joined by Isaac Twum, Kwesi Appiah, Samuel Obeng, Albert Adomah and some others.

Although Thomas Partey, Mohammed Kudus, and Jordan Ayew are not included in the list, they equally impressive for their clubs in Europe over the weekend as well.