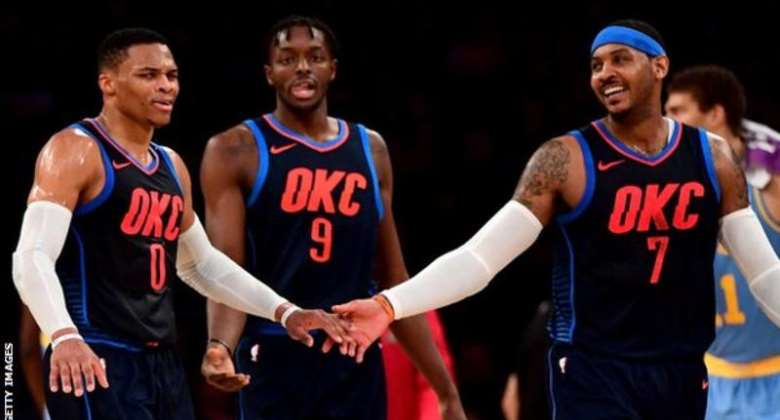 The Los Angeles Lakers have acquired Russell Westbrook and Carmelo Anthony, while Stephen Curry has signed a new deal with the Golden State Warriors worth a reported $215m (£155m).

The Lakers lost in the first round of last season's NBA play-offs and have brought in guard Westbrook, 32, from the Washington Wizards.

They have also signed forward Anthony, 37, from the Portland Trail Blazers.

Curry, 33, has extended his Warriors contract by four years to 2026.

Lakers coach Frank Vogel, who led them to the NBA title in 2020, has also signed a contract extension.

Westbrook, who hails from Long Beach and played college basketball at UCLA, has the NBA's most career triple-doubles (184) and was the 2017 NBA MVP.

"It takes a special mentality of competitiveness to take on the role of point guard for the Los Angeles Lakers," said general manager Rob Pelinka.

"We have seen some of the all-time greats master that role here, and now Russell Westbrook gets to come home and do just that."

Westbrook has career averages of 23.2 points, 8.5 assists, 7.4 rebounds and 1.7 steals in 943 games for Oklahoma City, Houston and Washington.

In a tweet James later deleted, he wrote: "Keep talking about my squad. Our personnel ages, the way he plays, he stays injured, we're past our time in this league, etc. Do me one favour please! Keep that same narrative energy when it begins! That's all I ask."

Curry has been a three-time NBA champion with the Warriors and won the league's scoring title for a second time last season with 32 points per game.

Hottest Photo Reports
Catch up with all the political quotes from our politicians.
Advertise here
More from Basketball
ModernGhana Links
Celtics great Bill Russell, 11-time NBA champion, dead at 88
There must be focus on the grassroots to grow basketball in Ghana - APO Group chairman advises
NBA: Hornets bring Steve Clifford back as head coach
TOP STORIES