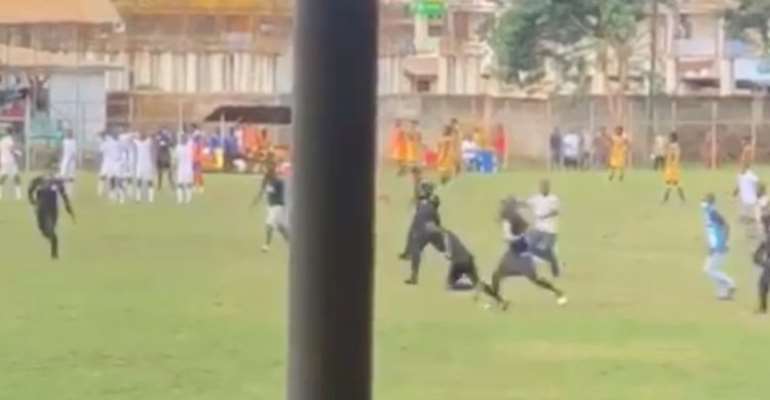 Referee Maxwell Hanson, who was attacked and beaten during a Division One League game between BA United and Real Tamale United has now revealed the home team fans targeted his reproductive organs in the vicious attack.

On July 4, 2021, Hanson was brutally attacked by fans of BA United after he awarded a penalty in favour of the away team RTU on the 40th minute.

Referee Hanson was unable to continue the match after the incident, bringing a premature end to the game.

RTU went into the game just one point above Berekum Arsenal and Tano Bofoakwa in Zone II of the Division One League and a win would have guaranteed their return to the top flight for the first time since 2013.

With BA United not in the fight for promotion, Brong Ahafo-based Bofoakwa and Arsenal fans reportedly stormed the Sunyani Coronation Park to throw their support behind BA United knowing victory for BA United would keep their promotional hopes alive.

And after referee Hanson awarded a penalty to RTU, fans breached the inner perimeter fence of the park and chased the referee around the pitch until he was eventually overcome and handed heavy slaps before security came to his rescue.

In his report to the GFA, Hanson revealed graphic details of the attack he suffered, with some fans apparently also targeting his testicles.

Some used their fists, others used their legs to kick my ribs and waist and one was in a possession of a dog chain. It was there about three (3) uniformed police personnel came to my rescue and pulled me to the technical bench of the away team. Dissatisfied, the irate fans of the home team followed and continued beating me with blows on my head, some pulling and squeezing my testicles simultaneously and from there, I could not endure the pain so I started screaming “mewu oo, mewu oo, mobekume oo”, to wit, “I’d die, I’d die, you’d kill me”.

It was there a number of uniformed police personnel came to my rescue. They were about eight (8) in number. I then told them I would not be able to continue the match because of the ordeal I had been through and I had also started experiencing body pains.

Surprisingly, the police officers said they could not guarantee my safety if I do not go on with the match. My assistants then came to me. Recalling their ordeal, Assistant one (1) said he was beaten till he fell and Assistant two (2) said he was given several slaps and a blow to his head, both attacks were from spectators believed to be fans of the home team.

At this juncture, the armed military men who were outside the inner perimeter joined. In our terrible state, the three (3) of us (myself and the two assistants) decided to discontinue the match but the police reiterated that our safety would not be guaranteed should the match be halted. The armed military men also said it would be very difficult for us to leave the field of play if we do not continue the match. Some spectators believed to be fans of the home team who found their way into the inner perimeter started chanting war songs and also said the match must continue.

These spectators were still armed with stones, dog chains, cutlasses, etc. The intensity of the threats and in order to save our lives, we (myself and 2 assistants) decided to continue with the match. The series of incidents transpired for about thirty (30) minutes. Instead of restarting the match with a penalty to the away team, I restarted with a drop ball to avoid attacks from the fans of the home team. This did not go down well with the supporters believed to be fans of the away team who also retaliated by throwing objects such as stones, sticks, sachet water and metallic objects onto the field of play.

This also delayed play for about 15 minutes. The head of the military, players and technical team of the away team then appealed to the spectators believed to be fans of the away team which they complied and the match was restarted. In the 45th minute, I ended 6 the first half.

After about 15 minutes of being held hostage by the irate fans, the police and the military officers approached us (myself and assistants) and asked whether we would not restart the match and I told them our lives were in danger. They then informed us they had brought in both police and military reinforcement.

I was then experiencing body pains and was bleeding from cuts on my back whereas the Assistant one (1) complained of severe headache, swollen head and severe body pains and Assisitant two (2) also had some scratches around his neck.

The medical team then came in to give us (Assistant one (1) and I) first aid treatment. There, the spectators, believed to be fans of the home team threatened that if we dared feigned injury and abandoned the match, we would be killed. It was there the Sunyani District Police Commander arrived at the scene and also asked whether I would be able to continue the match. I replied in the negative and when he inquired, I told him we were incapacitated hence our inability to resume the match.

Both the military and police insisted we restart the match because it would be very difficult for them to escort us from the field. Simultaneously, the spectators of the home team were still chanting, still armed and still insisting we start the match. this continued to happen whilst still held hostage on the field of play till darkness began to set in so we (myself, assistants and match commissioner) called the two (2) captains and told them the match would have to be postponed to the next day since darkness had set in and also, our lives were in danger but that was actually a ploy for us (myself, assistants and the match commissioner) to end the game, hence the match ended abruptly.

There was military reinforcement who together with the police escorted us to the dressing room and while at that, the irate spectators believed to be fans of the home team kept throwing stones in our direction and towards the dressing room. One of the stones hit the window of the dressing room but fortunately, no damage was caused. However, my communication gadget got damaged in the course of the attack.

Also, my cards and recording sheets were lost during the attack and mayhem, hence, cautions on reckless tackles on opponents and misconducts could not be incorporated into the report.