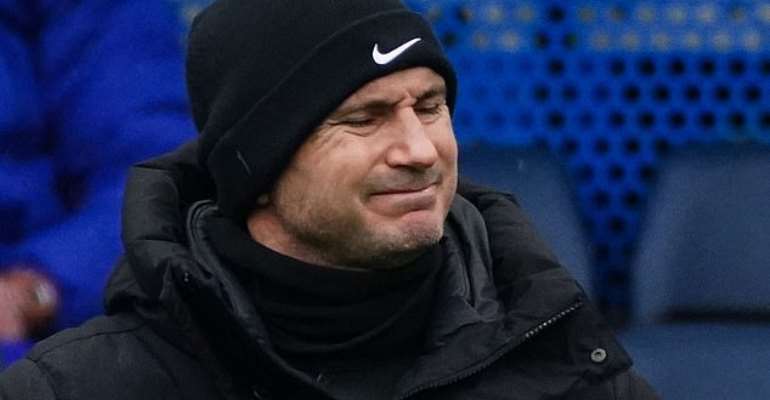 Former Chelsea midfielder Lampard, 42, leaves with the club ninth in the Premier League table after last week's defeat at Leicester City, having won once in their past five league matches.

His final game in charge was Sunday's 3-1 FA Cup fourth-round win against Championship side Luton.

Lampard was appointed on a three-year contract when he replaced Maurizio Sarri at Stamford Bridge in July 2019.

He guided them to fourth place and the FA Cup final in his first season in charge, and a 3-1 win against Leeds at the start of December put the club top of the Premier League.

However, the Blues have suffered five defeats in their past eight league games, as many as they had in their previous 23.

In a statement, Chelsea said: "This has been a very difficult decision and not one that the owner and the board have taken lightly.

"We are grateful to Frank for what he has achieved in his time as head coach of the club. However, recent results and performances have not met the club's expectations, leaving the club mid-table without any clear path to sustained improvement.

"There can never be a good time to part ways with a club legend such as Frank, but after lengthy deliberation and consideration it was decided a change is needed now to give the club time to improve performances and results this season."

Owner Roman Abramovich said Lampard's status as an "important icon" of the club "remains undiminished" despite his dismissal.

"This was a very difficult decision for the club, not least because I have an excellent personal relationship with Frank and I have the utmost respect for him," said Abramovich.

"He is a man of great integrity and has the highest of work ethics. However, under current circumstances, we believe it is best to change managers."

It is the most Chelsea have spent in one summer, eclipsing the £186m they invested at the start of the 2017-18 season. Lampard did not sign a single player during his first season as the club were operating under a transfer embargo, but spent more than £200m on seven major signings last summer, including £45m on Leicester's Ben Chilwell and £71m on midfielder Kai Havertz from Bayer Leverkusen.

Lampard is Chelsea's all-time record scorer, with 211 goals for the club between 2001 and 2014, and is also joint-seventh on the list of England players with the most caps, having made 106 appearances for his country over 15 years from 1999.

During his 13 seasons as a player at Stamford Bridge, he made 648 appearances and won 11 major trophies - including four Premier League titles and the 2012 Champions League.

His first managerial posting was at Derby. In his one season in charge, they reached the Championship play-off final, where they lost to Aston Villa.

Lampard became the 10th full-time manager appointed by Abramovich since the billionaire bought the club in 2003.

Having finished with 66 points last season after 20 wins and 12 defeats, Chelsea have lost six times in their opening 19 league games this season.

Lampard's points-per-game average of 1.67 is the lowest of any permanent Chelsea manager in the Premier League. During the Abramovich era, only Andre Villas-Boas (47.5%) has a worse win rate than Lampard's 52.4%, in all competitions amongst permanent Chelsea bosses.

In contrast, Jose Mourinho's win rate in all competitions during his first spell in charge was 67.03%, while Antonio Conte, Maurizio Sarri, Avram Grant, Carlo Ancelotti and Claudio Ranieri all had win rates over 60%.