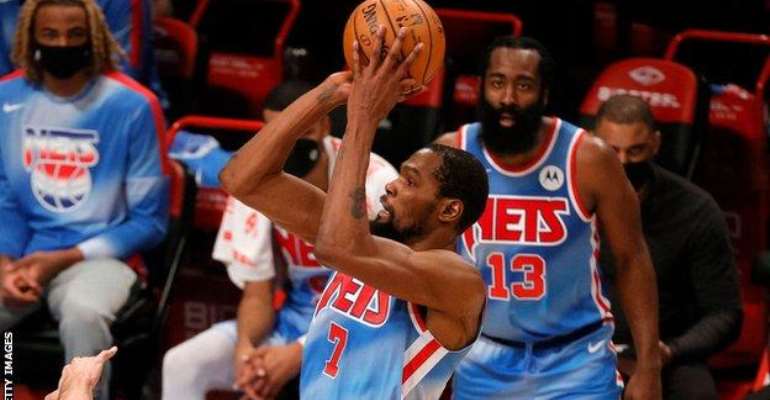 Kevin Durant and debutant James Harden starred as the Brooklyn Nets claimed their third consecutive win with a 122-115 victory over the Orlando Magic.

Durant scored a season-high 42 points to set a new franchise record of at least 25 points in nine straight matches.

Harden, who joined from the Houston Rockets this week, added a 32-point triple-double in his first appearance.

However, Kyrie Irving was missing for a sixth game for personal reasons.

Harden moved to the Nets from Houston as part of an initial three-team deal involving the Cleveland Cavaliers.

That became a four-team deal on Saturday when further moves involving the Indiana Pacers were officially announced.

Nets guard Caris LeVert - originally announced by the Nets as moving to Houston - has now joined the Pacers, who have sent two-time All Star Victor Oladipo to Houston.

However, Indiana say LeVert will be sidelined indefinitely after a small mass was found on his left kidney during a medical examination. The outfit said their new signing will have further tests.

The Detroit Pistons earned their first away win of the campaign with a 120-100 victory over the Miami Heat, as Jerami Grant scored 29 points.

Norman Powell made six three-pointers as the Toronto Raptors beat the Charlotte Hornets 116-113, while Ja Morant returned from an eight-game absence to score 17 points as the Memphis Grizzlies edged past the Philadelphia 76ers 106-104.