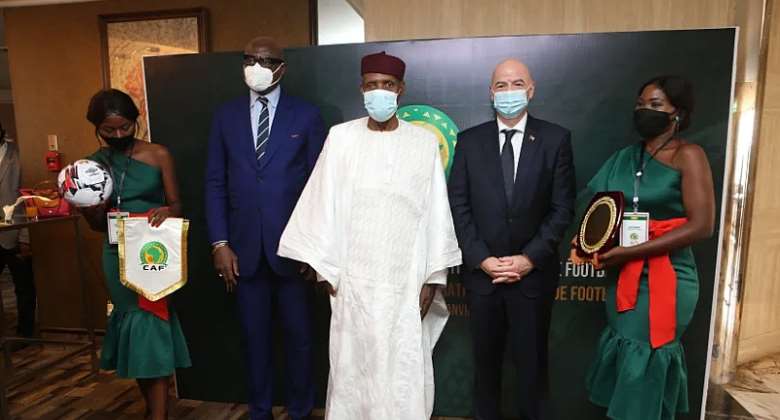 Former Caf President Issa Hayatou was on Friday decorated Honorary President of the organization at a colourful ceremony in Yaounde in his native Cameroon.

Acting Caf President Constant Omari presented a plaque and symbolic official Caf match ball to the iconic leader in the presence of FIFA president Gianni Infantino at the star-studded event.

Members of the Caf Executive Committee, several FA Presidents and Cameroon Government officials were also in attendance when the longest-serving leader in Caf history was festooned.

The event took place on the eve of the opening of African Nations Championship (CHAN), the tournament designed exclusively for home-based players, and which will be played in the central African country from 16 January to 7 February 2021.

The decision to confer the Honorary President title on Hayatou was proposed by the Caf Executive Committee at its meeting last month, and was unanimously approved by the Caf General Assembly.

The Acting Caf President lauded the role of the 74-year-old, who led the continent’s football governing body from 1988 to 2017, towards the development of the game in Africa.

“For a long time at Caf, we have been thinking and preparing this event that is dedicated to you,” Omari said.

“On behalf of the Caf Executive Committee, Senior Management members, Staff, and till the last servant of African football, and in the presence of Fifa President [Gianni Infantino], who elevated you to the rank of Honorary Vice President of FIFA, I bestow on you title of Honorary President of Caf.

“I reassure you of the friendship, gratitude, permanent thanks, and the emotion of the great African football family for this event.

“From now and forever, you will be our Guide, and our doyen, elder brother, but above all our Honorary President,” he added.

Fifa President Infantino said: “He [Hayatou] continues to contribute to football development. He has stressed on values like Passion, Unity, Solidarity”.

Flanked by close family members and friends, an emotion-filled Hayatou was full of gratitude for the honour bestowed on him in recognition of his contribution to the development and promotion of African football.

“It is with deep gratitude that I am here. I am happy to be among you here. I have a lot of memories with you.

“The hard reality of life is that we have this social distancing, so let’s put our priorities and principles intact. Let’s unite and protect each other.

“I am telling you goodbye, but I assure you I will remain available. Together, let’s celebrate this African Nations Championship (CHAN) together,” Hayatou concluded.

Hayatou started his journey in football administration in his youthful days when he was named as the General Secretary of the Cameroon Football Federation (FECAFOOT) at the age of 28.

Within two years he took charge as FECAFOOT President before successfully contesting for CAF elections to become its president in 1988.

In his 28-year reign as the leader of Africa’s football body, Hayatou championed the continent’s first hosting of the World Cup which was successfully staged in South Africa in 2010.

He has also been praised for the setting up for various youth tournaments in Africa including the youth tournaments for U-17, U-20 and U-23 which accelerated the development of the game. This, many believe, helped countries like Ghana, Nigeria and Cameroon to win global competitions like the Fifa U-17 World Cup, Fifa U-20 World Cup and the Olympic Games.

The expansion of the Africa Cup of Nations, the creation of the CHAN competition as well as futsal and beach soccer tournaments are parts of his achievements. Women’s football development, as well as the creditable performances of Cameroon, Nigeria, Senegal and Ghana at the Fifa World Cup tournaments, are also part of Hayatou’s accomplishments.